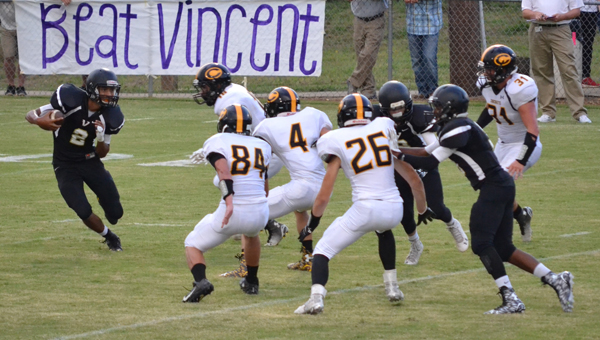 Josef Greene, left, will be one of the primary receiving targets for the Yellow Jackets entering the 2016 season. (File)

VINCENT – The football season starts in less than a month now, so continuing to call these “Way-too-Early predictions” is losing a little bit of its luster. But, for continuity’s sake, we’re going to keep rolling with it. For part six of the tour de force around the county, we’re taking a look at the smallest AHSAA school in the county, the 2A Vincent Yellow Jackets.

Last season was, statistically, the worst year in the history of the program for Vincent. The Yellow Jackets went 0-10, and only scored 39 points all season while allowing 507. At schools of Vincent’s size, the talent pool can change rapidly from year to year, and last year was the unfortunate downside of that reality. Now, moving into 2016, how quickly can the Yellow Jackets shake off last season’s stigma?

In the offseason Wiley McKeller stepped down from his head coaching position at 5A in-county Calera, and took charge of the rebuilding effort at Vincent in the wake of Jason Hill’s departure. McKeller is a proven offensive mind who brings energy and know-how wherever he goes, and was a great hire for Vincent. This however is definitely McKeller’s biggest challenge of his coaching career to date. Let’s see what the Yellow Jackets are working with this season.

At quarterback for the Yellow Jackets is going to be either junior receiver-turned-quarterback Cole Fincher or freshman Dusty Davis. Fincher is likely to get the nod to start games this season, as he has been in the program for years and understands the game on a more mature level, but Davis projects to be quite the gunslinger down the line, already standing at over six feet tall as a freshman. Fincher, who also plays on the baseball team, is not particularly big, but then again very few on this team are, he can however command the huddle and develop into a game manager for this offense.

Whoever is under center this season will benefit from the addition of Deandre Davis and Robbie Albright in the backfield. McKeller believes Albright has the potential to be the best linebacker he has ever coached, but because of the Yellow Jackets’ low numbers, the talented sophomore will play both ways and get his share of touches on offense as well. Davis, one of just three seniors on this Vincent team, is a quick, shifty back who can make people miss in tight spaces, and is the best athlete on the team according to McKeller. While Albright will still see touches, Davis is going to have the ball in his hands a ton this year.

Josef Greene, the younger brother of departed Vincent great Jace Greene, will be a junior receiver this season and has the physical tools to develop into the kind of wide out the Yellow Jackets need, if he can just further his understanding of the game. Greene will be joined out wide by Christian Henderson, who is in his first year of football but stands over six feet tall and is a good athlete, along with Zavien Kelley, who is also the point guard on the basketball team. Kelley will spend most of his time at corner for this group, but will work in heavily at receiver as well.

Up front, big man Zeb McCord is back to anchor the offensive line. McCord, who stands at a shade over 6-feet-4-inches and weighs in at roughly 275 pounds, is easily Vincent’s most imposing presence up front. He will be back at one of the guard slots along with a number of fresh faces, including freshman Torian Datcher, sophomore Chris Hardie, who saw time in games last season, and junior Ty Hall amongst others.

Albright will lead the defense from his linebacker position. McKeller will utilize just two linebackers this season, like he did at Calera a year ago, but the sophomore will be counted on heavily to lead the unit as a whole.

In the secondary will be familiar faces like Greene, Kelley and Davis, along with Kaleb Allen who has had a good summer and will slide into the free safety roll. The secondary is long on athleticism but short on experience, which McKeller is trying to remedy.

Vincent has moved from 2A Region 4 to Region 5, and is now paired up with teams like Lafayette, Fayetteville (a team that beat the Yellow Jackets 37-0 last year) and Reeltown. The region is not the toughest in the state, but it is tough to look down the Yellow Jacket schedule and circle too many easily winnable games.

Way-Too-Early prediction: McKeller is a proven winner, and his teams in the past have consistently put up points. In both 2013 and 2014, his Calera teams finished the regular season with the highest-scoring offense in the state. The man knows football, knows how to build an offense and can turn things around in Vincent. The Yellow Jackets will be more competitive this year than they were a season ago, McKeller will make sure of that. However, this team and this program are a ways away from being competitive on Friday nights, as numbers must be built up and solid technique ironed out across the board. Vincent will make strides this year on the gridiron, but usually the scoreboard won’t easily relay that, and Vincent will finish 2-8.

The Vincent Yellow Jackets will look to rebound from their winless 2015 campaign in 2016. (File) By BAKER ELLIS /... read more