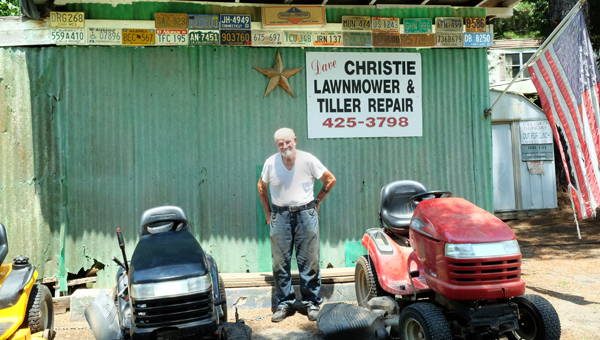 It was the proverbial 110 degrees in the shade and Dave Christie was out in his yard working on a lawn mower. When asked if it wasn’t too hot to be out mid-day, he replied, “Well, I’ve got a fan blowing on me.”

Christie, who prefers to just be called Dave, has quite the solid reputation for lawn mower and tiller repair. Repair seekers come and go all through the day, and he is there, rain or shine.

He has lived in this area on Highway 13 for 56 years; recalling that it was just a dirt road back then.

In front of the Christie Lawnmower & Tiller Repair shop are various parked mowers, and closer scrutiny will reveal a fine collection of license tags representing all 50 states, Washington D.C., Mexico and Canada.

Intriguingly, too, they are mounted in alphabetical order, an indication of the precision of their owner. The dates of the plates vary; a small square Maine plate with five digits dates from 1928.

Christie is a collector, a crossword enthusiast and his very sharp 88-year-old mind is filled with significant dates and details.

He was raised in Camp Creek, WV, near Bloomfield, and the door to his office sports a wooden silhouette of his birth state as well as two WV license plates, one from 1960.

Christie also tells of the life-size Uncle Sam figure that he made about 25 years ago that held his mailbox. Now at his mailbox is a green road sign, denoting “Christie Place”— a gift from his brother a few years back.

Dave Christie served in the US Air Force from 1947-1950, choosing to go to the Panama Canal Zone after basic training. He is retired from W. S. Dickey Clay Manufacturing.

“Someone asked me, ‘How long you going to work on these lawn mowers?’” he grins. “And I said, “Until I’m six feet in the ground!”

The oldest member of his family still living, Christie plans to live to be at least 100. He and his 11-year-old dog, Joy, make the most of every day. Dinner, every night except Sunday and Wednesday, is at Cracker Barrel, where he afterwards brings home two pork chops (one for Joy) and four biscuits for the visiting cats.

A dedicated member of the Church of Christ since 1960, he joins his church family on Sundays and Wednesday evenings.

‘The salsa guy:’ After Midnight Salsa Co. opening in Helena