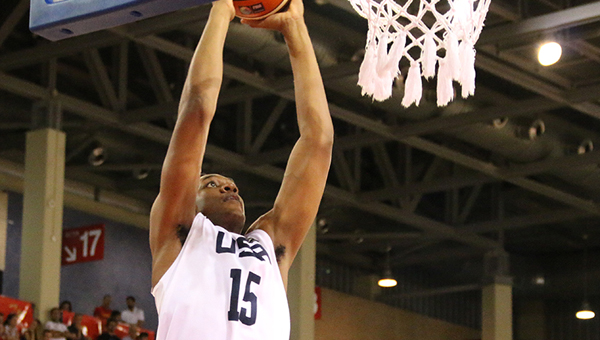 MONTGOMERY – Austin Wiley, the 2015-16 Shelby County boys’ basketball Co-Player of the Year continued what has been an incredible summer on Wednesday night, July 20, with a 30-point, 15-rebound performance at the AHSAA North-South All-Star basketball game held at Alabama State University’s Dunn-Oliver Arena. Wiley, playing for the North team, lead the North to an 84-73 win and was named the North’s MVP.

The All-Star game was comprised of some of the top rising seniors in the state, although there were a few notable absences, like the other half of the Shelby County Co-Player of the Year duo, Pelham’s Alex Reese, as well as Mae Jemison’s John Petty. Wiley was the headline talent of the game, and the 6-foot-11-inch Auburn commit did not disappoint, dunking home the game’s first bucket and leading the charge for the North from the beginning. Wiley had 20 points in the first half, primarily coming from dunks, as the North raced out to a 44-37 halftime lead.

The big man continued his dominance in the second half as the North won going away, 84-73. The North led from wire-to-wire, and the much-larger North squad outrebounded the smaller South team by a 52-25 margin, with a whopping 15 of those coming from Wiley himself.

The All-Star game appearance came on the heels of Wiley’s trip to Zaragoza, Spain, where Wiley helped the USA U17 Men’s World Championship Team capture the Gold Medal at the 2016 FIBA U17 World Championship for Men back on July 3. That U17 team went undefeated in the FIBA Worlds, and Wiley contributed six points, five rebounds and a block in 10 minutes of action in the Gold Medal game.

While Wiley was the biggest name at the North-South All-Star game, there was another Shelby County athlete taking part as well in Helena’s Jon Brown. Brown, who started the game for the North alongside Wiley, contributed seven points, five rebounds, three assists and a steal in 19 minutes of action. The rising senior Brown, who was a Third Team All-County selection last season, will lead the Huskies heading into the 2016-17 season.

Josef Greene, left, will be one of the primary receiving targets for the Yellow Jackets entering the 2016 season. (File)... read more