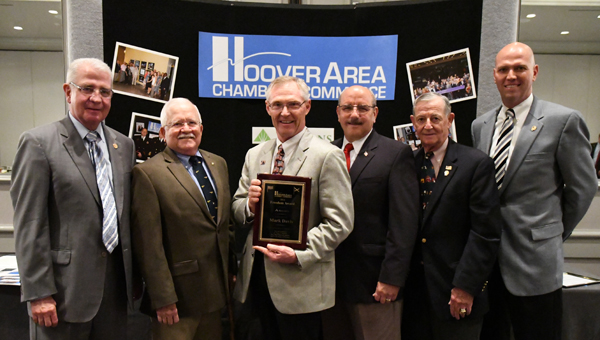 Mark Davis has put his support for veterans into action and encourages others to do the same.

Davis, a veteran himself, was presented the Hoover Area Chamber of Commerce’s annual Freedom Award during the Chamber’s monthly luncheon on July 21 at the Hyatt Regency-The Wynfrey Hotel in Hoover.

Bob Beaty with the Hoover Veterans Committee spoke about the Committee’s efforts and Davis.

“He’s a go-getter,” Beaty said of Davis. “He is the Energizer bunny on steroids.”

“I don’t know how he sleeps at night; I don’t think he does sleep at night,” Pocopanni said.

Davis said he grew up in Montgomery and joined the Navy over his mother’s objections.

“What I learned in the Navy gave me the career that I have today,” Davis said.

Davis said he was inspired about 10 years ago to make a positive difference for veterans.

Davis is in his third year of serving on the Hoover Veterans Committee, according to his nomination, and was instrumental in getting the “Remembering Our Fallen” veterans exhibit displayed.

Vettes4Vets has raised more than $275,000 for Gold Star and Silver Star families, the Lakeshore Foundation, 3 Hots and a Cot, a $100,000 scholarship for veterans at UAB and the Aldridge Gardens Veterans Memorial Arbor.

Davis is also a six-year board member at Aldridge Gardens, where he initiated the program and developed the design and financial plan for the Veterans Memorial Arbor and the Gateway Pentagon.

Davis won the first ever award from his professional society, the American Society for Nondestructive Testing, for the advancement of military personnel into NDT which was through the University of Ultrasonics in Hoover, according to the nomination. He worked with the Veterans Administration to get his ultrasonic training approved for the GI Bill and Post 911 GI Bill, helping ensure future jobs for returning veterans.

Davis said many people thank veterans for their service, but he encouraged them to go a step further.

“Say, ‘I want to do something to help a veteran today,’” he said.