HELENA–A 20-year-old Pelham man was arrested and charged on July 22, after allegedly committing several crimes after eluding and fleeing Helena and Pelham police. 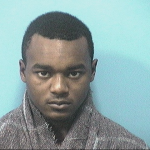 The Helena Police Department arrested Shun Bishop Jr., who lists an address in the 300 block of Holland Lakes Drive in Pelham, on July 22 and charged him with several crimes including first-degree possession of marijuana, reckless driving, attempting to elude law enforcement, speeding more than 25 miles per hour over the speed limit, second-degree assault and attempt to distribute marijuana.

On July 21 at approximately 3:40 p.m., a Helena police officer attempted to stop Bishop for a traffic violation, but Bishop allegedly failed to stop and struck a patrol car and then fled on foot, according to Helena police.

Bishop then continued driving north on Alabama 261 into Pelham where he then turned onto Shine Drive. Bishop allegedly struck the patrol car and fled on foot and remained at large but was apprehended a short time later.

Second-degree assault is a Class C felony, attempt to distribute drugs is a Class B felony and first-degree possession of marijuana is a Class D felony.