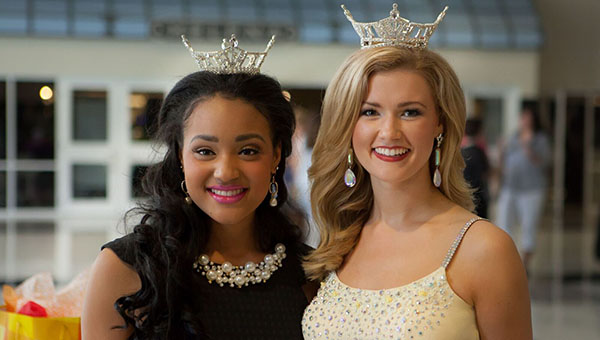 HELENA–Helena High School senior Tiara Pennington will be flying south to Orlando, Fla. July 29 to represent the state of Alabama as well as Shelby County in the Miss America’s Outstanding Teen pageant after being crowned Miss Alabama’s Outstanding Teen in March.

On Saturday, July 23, a sendoff party was held at HHS to celebrate Pennington’s upcoming trip to Orlando and to highlight some of the outfits she will be wearing during her 10-day stay at the MAOT pageant.

Current Miss Alabama Hayley Barber of Pelham as well as Miss Alabama 2015 Meg McGuffin both were at HHS on July 23 to show support and wish Pennington well as she prepares for the national competition.

Before making it to the national pageant, Pennington competed in the Miss Alabama’s Outstanding Teen Pageant in Sylacauga in March and spoke about her emotions once she knew she’d be representing the state.

“Well the day I won I balled like a little baby and I dropped my awards on the ground and picked them back up,” said Pennington. “I was super excited and ever since then I’ve been super busy going all over the state with appearances and just getting ready for nationals.”

During the sendoff party Pennington thanked several people and organizations who have helped her with her fitness, finding attire for pageants and just helping her excel overall while competing over the years.

During the MAOT pageant, Pennington will be competing against 50 other girls ages 13-17 for the crown and will be judged on an interview, on-stage question and evening gown wear, fitness, talent and the finale on Saturday, Aug. 6.

When asked if there’s a piece of advice she’s received that’s stuck out the most, Pennington said McGuffin provided wisdom that she’ll take with her to Orlando.

“One that really sticks out to me is Meg McGuffin Miss Alabama 2015 told me that ‘It’s not about the destination, but it’s about the journey that you take,’” said Pennington.

By NEAL WAGNER / Managing Editor COLUMBIANA – A 32-year-old Maylene man who is facing allegations he sexually abused a... read more