COLUMBIANA – A 32-year-old Maylene man who is facing allegations he sexually abused a child over a 22-month period remains in the Shelby County Jail without bond after he was arrested on a burglary charge while on bond for the sex charge. 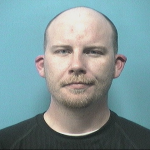 The Shelby County Sheriff’s Office arrested Anthony Ray Bryson, who lists an address on First Avenue West in Maylene, on Jan. 30 and charged him with one felony count of sexual abuse of a child younger than 12.

The charge is a Class B felony, according to Alabama law, and carries a maximum sentence of 20 years in prison upon conviction.

The arrest came after the case against Bryson was presented to a Shelby County grand jury in January. After reviewing the evidence, the grand jury returned a one-count indictment against Bryson, resulting in a warrant for his arrest.

According to the grand jury indictment, Bryson allegedly subjected a child younger than 12 to sexual contact between January 2014 and October 2015.

Bryson was released from the Shelby County Jail the day after he was arrested after posting a $25,000 bond.

While out on bond for the sex charge, Bryson was arrested by the Vestavia Hills Police Department on a felony third-degree burglary charge in April after he allegedly entered a victim’s house “with intent to commit” theft.

After he was arrested on the burglary charge, Bryson was re-booked into the Shelby County Jail without bond.

Bryson is now set to appear in Shelby County District Court on Oct. 3 for a hearing at 8:30 a.m.

By EMILY SPARACINO / Staff Writer CHELSEA – A Chelsea woman has died following a crash with a CSX train... read more