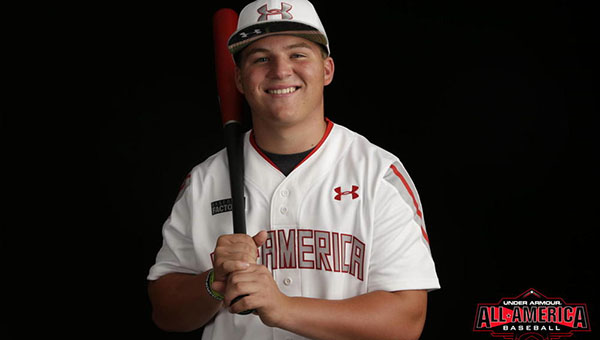 Helena Huskies senior catcher Sam Praytor participated in the Under Armour All-America game on July 23 in Chicago with some of the top high school baseball players in the country. (Contributed)

CHICAGO–Helena High School senior catcher Sam Praytor had a weekend he’ll never forget as he had the opportunity to join 39 other top high school baseball players from around the country to compete in the ninth annual Under Armour All-America baseball game and more, the weekend of July 21 in Chicago.

Under Armour, along with Baseball Factory, hosted the All-America baseball game on Saturday, July 23 at the Chicago Cubs Wrigley Field and also provided players with numerous free gear, a home run derby, formal workouts in front of MLB scouts and more.

At the All-America game, which was broadcast live on the MLB Network, Praytor played catcher for Team National, which edged Team American 5-4 in a rained-shortened 7 inning game.

“Tim was a normal guy and you would never know he played 19 years in the MLB and won a World Series,” said Praytor. “His son was there and he just seemed like a regular dad and you could just go up and talk to him about anything.”

Before the game, Praytor said he was never nervous but he also got some solid advice from another former MLB player.

“Bill Ripken, who was hilarious and I think played 12 years in the MLB, said don’t worry about what other people are doing in the game and just focus on yourself and don’t get too caught up in anybody else’s performance,” said Praytor.

Even though the weather conditions were not favorable for baseball, Praytor still got the opportunity to catch some of the best high school pitchers from around the country at iconic Wrigley Field.

“It was a lot of fun,” said Praytor. “Every guy I caught threw like mid 90s and they were some of the top pitching talent in the country and it was fun calling their game.”

When asked what his favorite part about the weekend was, Praytor said it was participating in the home run derby.

“We had to qualify on Friday and the top eight players would be in the Home Run Derby,” said Praytor. “I qualified and I hit three homeruns and the third homerun went out of the stadium. That was pretty awesome.”

Praytor, a 2017 baseball commit for the University of Alabama, left Chicago with loads of free gear courtesy of Under Armour and plenty of memories.

“When we pulled up in the bus to the stadium I got chills,” said Praytor. “Everyone’s jaw dropped the first time being in the stadium. Everyone was just taking photos and videos.”