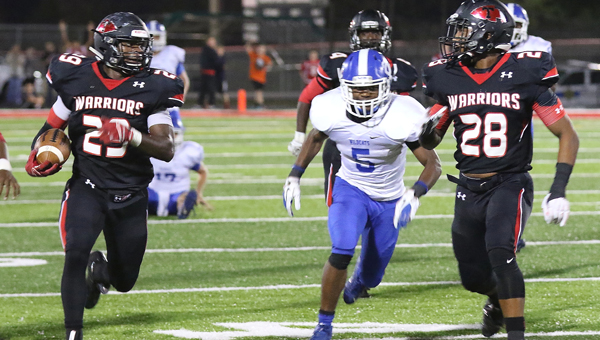 Nick Mobley (with ball) and KJ Robertson will lead the Thompson defensive unit in 2016 from the linebacker position. (File)

ALABASTER – As the calendar prepares now to turn from July to August, football season is beginning to loom over our collective heads like a storm cloud in the desert. We are waiting, parched, for the cloud to burst, but it is not yet quite time.

As we continue to trek toward football season, we still have a number of predictions to get to. For part seven of the prediction tour, let’s take a look at one program that has more buzz and excitement surrounding it than normal, the Thompson Warriors.

When Mark Freeman inherited this Warriors team a season ago, he inherited a mess, simply put. The Warriors’ were coming off a 0-10 season in which they had rarely been competitive, and were generally an afterthought around the state. In one season however Freeman, who is one of the most successful football coaches in Alabama, turned Thompson around and led the Warriors to a respectable 5-5 finish in 2015.

The .500 finish was the best finish for Thompson since 2006, which was coincidentally the last time the Warriors made the playoffs. Thompson has the longest playoff drought of any team in the county, and the people around Alabaster are hoping this is the year that unfortunate streak gets snapped. Let’s get into the personnel that’s going to be responsible for making that happen.

First things first, Thompson will need to land on a quarterback. Right now both junior Josh Huner and sophomore Caleb Ragland are battling for the job in the wake of Walker Lott’s graduation. Huner ran the JV squad last year and has a more solid foundation running Thompson’s offensive scheme than does Ragland, but Huner has also been sidelined for some of the spring and summer, during which time Ragland has excelled. If one of the two can separate themselves from the other in the first few weeks of fall practice, then Freeman will name a starter heading into the first game, otherwise both could see playing time as the two could take this battle into the regular season.

Whoever is under center will also have a relatively new face beside him in the backfield as well, as Carlos Stephens and his 1,115 rushing yards from last year have graduated. In much of Freeman’s past 17 years as a head coach, his teams have ended up running the ball about 65 percent of the time by the end of the season, so filling Stephen’s void at running back will be of vital importance. Junior Jo-Jo Ford, who saw spot carries last year, will step into the running back role along with sophomore Shadrick Byrd, who has impressed this offseason. Those two, along with Corey Burroughs, will be responsible for handling the majority of the running responsibilities.

The Warriors also lost two of their top receiving targets from last year in Jordon Haywood and Nolan Burke, but there are younger faces ready to step into those roles as well. Juniors Sam Holmes and Alondee Vasser will step into the primary receiving roles along with Moe Edwards, Trey Turnbow and Chris Lewis, all of whom will be counted on to help carry the passing game.

The offensive and the defensive line boast the only two Division I offers currently on this Thompson team in Amari Kight and Mackie McNeal. Kight, just a sophomore, is a massive 6-foot-5 inches and weighs 315 pounds and will play tackle on the offensive line while McNeal, a junior, has essentially the same measurables and will be back at defensive end. Both currently have offers from Mississippi State. Senior Kamari Perry will join McNeal on the defensive line, while Evan Perman and Tyler Couch will join Kight on the offensive line. The other line jobs are still in the process of being claimed.

The defensive side of the ball is more formidable on paper in terms of returning starters for the Warriors. Senior middle linebacker Nick Mobley, the team’s leading tackler from 2015, is back and will lead the unit this year. Mobley is a quick, nasty linebacker who can disrupt the running game of opposing teams and drop back into coverage with ease as well. Mobley, alongside KJ Robertson and Jalen Rayam, will lead this defensive unit that gave up 20.6 points per game last season.

The secondary as well boasts two of the best, if not the two best, athletes on the team in Austin Davis and Ar’Shon Willis. Davis, who transferred into Thompson a season ago from Helena and Willis, who came to the Warriors last year from Vincent, make for a special combination in the backfield. Both are freakishly athletic, and will cause headaches for any opposing quarterback this season.

Way-Too-Early Prediction: This Thompson defense has a chance to be a really, really good unit. Between McNeal and Perry along with Mobley, Willis and Davis, the Thompson defense will have a chance to develop into quite a formidable group this year. If the offense can come together and click, then this team will return to the playoffs for the first time in 10 years.

Thompson is however still in one of the toughest regions in the state, 7A Region 3, along with Hoover, Spain Park, Mountain Brook, Vestavia Hills and Oak Mountain to name a few. A season ago Thompson had Oak Mountain on the ropes until the Eagles mounted a ferocious fourth-quarter comeback and lost to Spain Park, the 7A runners-up, by one point 15-14. This year is the year that Thompson wins those tight games and returns to the postseason, and the Warriors will post a 6-4 regular season finish, which will be enough to get them into the playoffs.