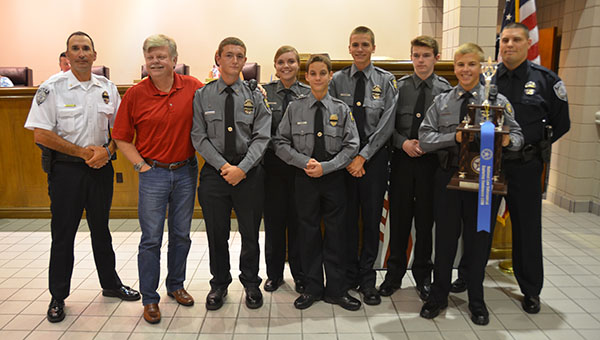 The Helena Police Explorers Post 790 was recognized at the Helena City Council meeting on July 25 for their recent success at a national competition in Flagstaff, Ariz. (Reporter Photo/Graham Brooks)

HELENA–Twelve members of the Helena Police Explorers Post 790 recently returned home from the National Police Explorer Conference in Flagstaff, Ariz. and were honored for their performance at the July 25 Helena City Council meeting.

The 12 explorers, along with advisors Michael Nelson and Josh Lindsey, spent 11 days out west at the national conference where they competed against 500 other explorer posts from across the country in a variety of competitions.

The Helena Police Explorers have attended the national conference that is held every two years beginning in 2000, and competed in several different events including domestic violence calls, building searches, traffic stops, traffic accidents and more.

“We took 12 explorers there and we we’re proud to say that Capt. Spencer Hollon and Lt. Drew Marling brought home the third place two-man pistol team trophy,” said Helena Police Chief Pete Folmar. “So they’re the third best shooting duo of explorers in the country. They competed against about 500 kids and we’re very proud of all of them. They went and competed and trained hard and it was a successful trip.”

Hollon, who has been a Helena Police Explorer for three and half years, and the other explorers showed off the third place trophy at the council meeting on July 25, where Hollon said he “felt extremely proud to bring the trophy to our explorer post.”

“We had different timing shoots that we had to do that ranged from five minutes, 20 seconds and then 10 seconds,” said Hollon. “We competed against around 250 teams. There’s 500 explorers who shot and each post had a two-man team.”

Hollon said he wants to become a law enforcement officer one day and discussed his favorite part of the program.

“My favorite thing is the ride alongs because you get to see so much and it’s good training,” said Hollon. “I want to go into the law enforcement field eventually. My plan is to join the military and then go to college and become a police officer.”

The Helena Police Explorers consist of teenagers and young adult’s ages 14-20 that are interested in pursuing a career in law enforcement.

The explorers attend a variety of competitions each year and help with a variety of events held within the city of Helena.