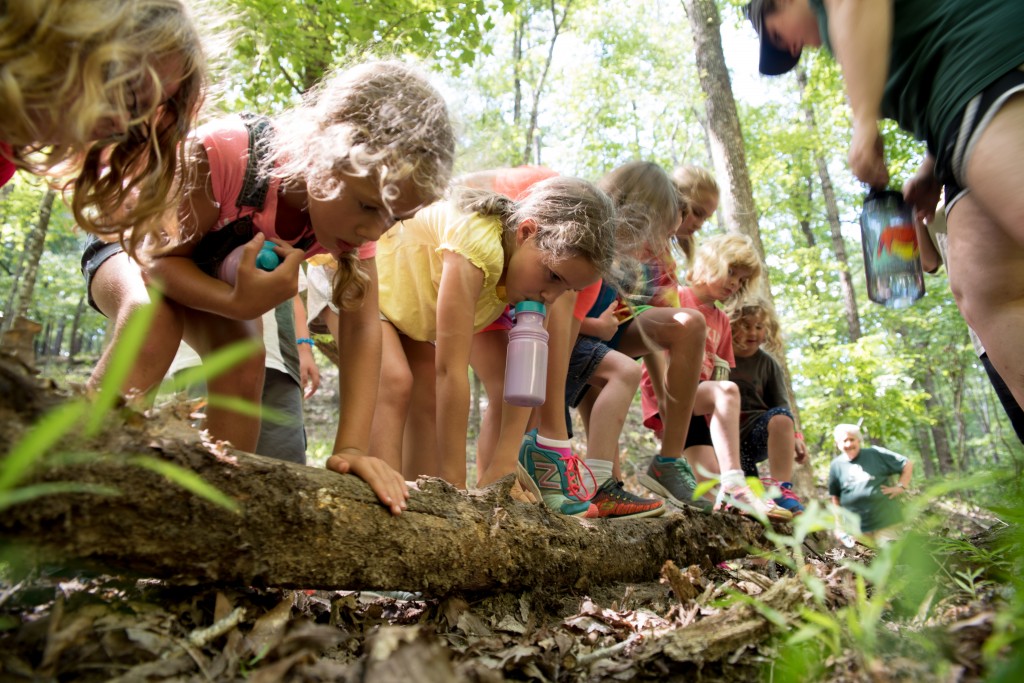 Kids at the AWC Back to School camp search for bugs under logs. (Reporter photo/Keith McCoy)

PELHAM – Feeding raptors, creating bird species and making snakes out of rice and socks are just a few of the things campers enjoy at the Alabama Wildlife Center’s Back to School summer camp.

From 8 a.m. to 4 p.m. July 25-29, children entering grades one through six are trading in their video games for hiking shoes and bug explorations.

“I love to hike a lot and look at different insects,” said second-year camper Robbie Earle, 7.

Campers Austin Brantley and Madelyn Young, both 8, said they enjoy feeding the birds the most.

Campers start each day by journaling about their experience from the day before and then hiking to Tree Top Nature Trail at Oak Mountain State Park to feed and care for birds of prey that are permanent residents at the center, said Scottie Jackson, AWC director of education and outreach.

One purpose of the AWC is to rescue, rehabilitate and re-release birds, but Jackson said some birds have injuries that cause long-term problems and prevent them from being able to survive in the wild. In those cases, the birds become a part of the center’s conservation education program.

After lunch the children learn about a new class of animals and participate in arts and crafts. Jackson said the purpose of the day camp is to inspire stewardship and a love for Alabama’s wildlife.

“We want to start teaching children now to be aware of the different ways they can cause harm, like throwing trash out the car window or leaving fishing lines on the ground at the lake,” Jackson said.

Jackson said being hit by vehicles, gunshot wounds, falling from nests and fishing line entanglements are common causes of injuries for birds. Each day of the camp focuses on a different class of animals, such as fish, insects, reptiles, amphibians, mammals and birds.

“It’s a magical and empowering thing for a kid when they see an animal for the first time,” Jackson said. “We got lucky Monday and got to see a small snake during our hike. It was smaller than a pencil, but the kids were so excited to see it.”

On the last day of camp the campers will meet and take pictures with birds native to Alabama and go on a tour of the AWC rehabilitation clinic.

The camp costs $195 for non-members and $180 for members. For more information go to Awrc.org.

Blue replacement bulbs have installed in all outdoor lights at Cahaba Valley Fire and EMR District’s Station 181 as a... read more