Cyclists riding across the country for Gabe and his cause 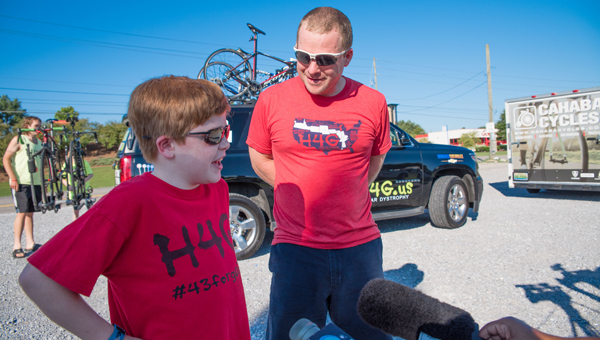 Gabe Griffin and Michael Staley talk to media members July 26 at a departure event for “Ride4Gabe.” (Photos by Keith McCoy)

Three cyclists will cover nine states in 11 days as part of a journey to end a progressive muscle wasting disorder affecting a local boy.

“Ride4Gabe” 2016 is scheduled to depart Maine on July 29, with Wes Bates Payne Griffin and Michael Staley cycling south to Mobile in the name of Gabe Griffin, an 11-year-old Chelsea Middle School student.

The mission of Ride4Gabe to pedal bikes across America while creating awareness for Duchenne muscular dystrophy.

Gabe’s form of Duchenne is caused by missing information processors in a gene. Gabe is on the front line of the war on this rare pediatric genetic condition, and doctors and researchers have the tools to win the first battle and slow the disorder. The first DMD drug approval will spur future research and investment, organizers say.

The bike ride is intended to demonstrate the rigors and fatigue Duchenne kids feel. The cross-country treks are aimed at shifting public policy gears for rare disorders and unmet medical needs. 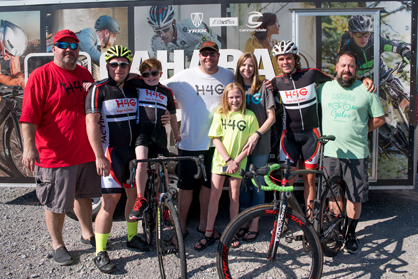 Gabe spoke to the media at a departure event July 26 off U.S. Hwy. 280, alongside team members and family.

His twin sister Addie was among those in attendance.

“Addie does gymnastics and she stands up for me,” Gabe said, but Addie said that Gabe is the one that “inspires” her.

Gabe will be part of a 10-person, three-vehicle support team that will tag along with the cyclists.

“It makes me feel happy and special,” Gabe said about the effort. “Other people are trying to help.”

The cyclists plan to cover 200 miles a day. Other riders plan to join the caravan at different locations along the way, Staley said.

“We’re going to raise awareness as we go,” Staley said. 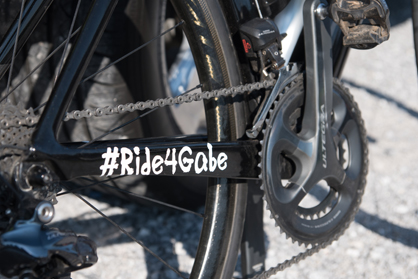 The trip is designed to raise awareness for Duchenne, a type of muscular dystrophy.

Jeff White is handling logistics for the trip and cooking meals.

“This isn’t a vacation by any means,” White said about the effort. “It’s a huge sacrifice on their part.”

Duchenne is one of the nine types of muscular dystrophy. It typically only affects boys (1 in 3,600), with muscle deterioration symptoms showing at a very young age.

Children with Duchenne eventually cannot ride bikes, run, jump, play, climb, walk or hug their parents. Ultimately, then cannot breathe on their own.

Donations are being accepted and can be made by texting “Gabe” to 91999, visiting HopeForGabe.org or calling Gabe’s father Scott Griffin at 542-1069.

“There are a lot of great people who are on our side,” Griffin said. “The support just continues to grow.”

Kandace Weaver (left) and Jamie Riley (right) stand behind the counter of their clothing boutique in Pelham.(Reporter photo/Briana Harris) By... read more