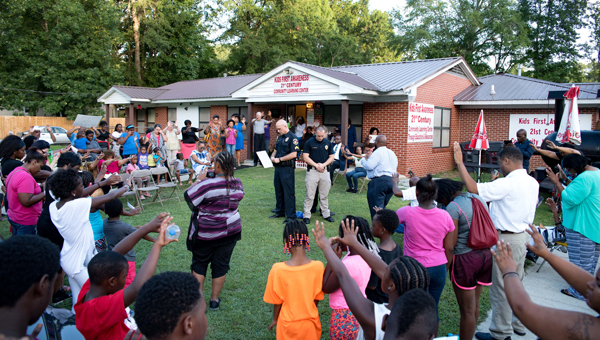 ALABASTER – Kids First Awareness Community Center brought people together to pray for unity and peace in the community, state and nation on July 26.

Kids First Executive Director Cindy Hawkins said the night was about bringing the community together to talk and pray and show residents and police are unified.

“It’s so important we come together to pray for our police and community,” Hawkins said. “We celebrate and support each other, because it doesn’t matter what color your skin is we all bleed red.”

Pierre said it was key to communicate with officers any time they stop you and to let them know if you’re uncomfortable or have questions.

“It’s all about communication,” Pierre said. “Let us know how we can best serve and protect you.”

After addressing the residents Pierre and other Alabaster officers joined together and were encircled by citizens who extended their hands toward the police and prayed for their safety.

Afterwards the crowd separated into groups to pray and held signs for what they were praying for. Hawkins said it was important to do a street prayer and have people from every walk of life hold hands together in prayer. 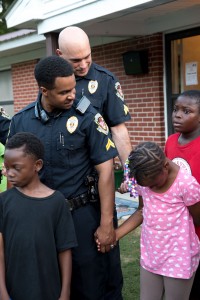 “We pray loud and we pray bold,” Hawkins said. “This is how we will make an unseen change toward peace.”

Alabama Family Rights Association president and Kid First Awareness board member Kenneth Paschal said it was nice to see an event bring people together instead of dividing them.

“Everywhere you look in the country people are dividing over different things,” Paschal said. “Tonight you didn’t know who was a republican, a democrat or any of that. It was people coming together for unity and peace.”

Hawkins invited Hezekiah Jackson, President of the Metro Birmingham Chapter of the NAACP and Priscilla Hancock Cooper, of the Birmingham Civil Rights Institute to talk about African American heritage after the prayer.

Hawkins said she wanted the kids to learn about their culture and make the night a way for them to learn respect for police and authority and respect for their heritage.

“What they do here at Kids First is so important to these young people and their development,” Jackson said. “Cindy does a great job and it’s why I continue to make the 42-mile drive down here.”

Kids First Awareness is a non-profit with a mission of providing kids and families with the necessary foundations to prepare for future education and life.