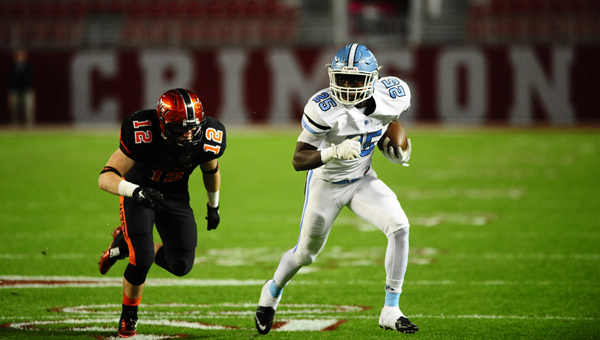 Larry Wooden will be the catalyst for the Spain Park offense in 2016, and the senior back will need to have a big season if the Jaguars hope to return to the 7A title game. (File)

HOOVER – Okay we’re a little over halfway done with these now, and we still have a ton of teams to talk about. We’ve looked at some of the biggest schools across the county, but now we turn our attention northward to the Spain Park Jaguars, who ended the 2015 regular season as the No. 1 team in 7A.

Last season was potentially the most successful season ever for Spain Park’s program. Not only did the Jags beat Hoover for the first time in the history of the cross-town rivalry, Spain Park shut out the Bucs in the regular season, 17-0, and beat them again in the 7A semifinals, 7-6. Spain Park played for a state title for the second time in program history last year, but came up just short to a worthy McGill-Toolen team, losing 14-12. Now, heading into 2016, the target on Spain Park’s collective back has increased in size somewhat, as have the in-house expectations. Let’s dive in to what Spain Park will be working with this fall.

With the graduation of Joey Beatty, who was a top-notch game manager for Spain Park last year, the quarterback position is once more in flux. Last summer Beatty was battling for the starting job with then-junior Hunter Howell, and now Howell, a senior, is battling for the job with junior Braxton Barker. Both Howell and Barker have had impressive summers and have made a strong case for the starting nod, although a decision has not been made yet. Head coach Shawn Raney has said he will name a starter the week of the Gadsden City game, which is scheduled for Aug. 19, less than a month away.

Whoever is under center will be able to rest a little easier knowing Larry Wooden is back. Wooden, who will be Spain Park’s top offensive threat this season, racked up 1,240 total yards of offense last year while splitting touches almost dead evenly with Wade Streeter, who has since graduated. At the time of this article, Wooden had eight college offers, including an offer from Minnesota, and that number will likely rise as the year progresses. The rising senior runs with a deadly combination of brute power and finesse that is fun to watch and maddening to defend, and has the above-average hands to be a concerning weapon in the passing game as well. Containing Wooden out of the backfield will be the top priority of all defensive coordinators facing Spain Park this fall.

As is typical with Raney’s offenses, the Jags did not throw the ball at a dizzying rate last year and likely won’t this year either. However, while last season Spain Park really had only two consistent options at receiver by the end of the year, not including Wooden, this year the Jags will be deeper out wide. Senior Thomas Jordan will be the main receiving threat in this offense, and will be joined by classmates William Mee and Landon Shoemaker, who have been in the system for years and are ready for breakout contributing seasons as seniors. Jalen McMillan, a junior, will also factor into the receiving contingent.

The offensive and the defensive line both lose their top athlete from last season in Grey Best and Jonah Tibbs, which is tough, but both units will still be strong. Seniors Will Mullins and Bredt Stover, who will be three-year starters, will lead the offensive line and will be joined by classmates LJ Murray and Burrell Boswell, giving the Jags four seniors across the front. The defensive line profits from the return of seniors Damon Wright and Douglas Henze, who will also both be three-year starters this season, and those two will be joined by senior Kalik Mallard and junior Jacob Pughsley. While two of the top individual pieces across the front are gone from last season, the Jags have the personnel to make those losses seem negligible.

The loss of Perry Young at the weakside linebacker position will be the most obvious and glaring hole this season. Young, who is now playing his college ball at the University of Cincinnati, was a force for the Jags in the middle of the field last season, and was a First-Team All-State player as a result. While his loss will be a challenge to replace, Spain Park does return Houston Hollis to the linebacking corps. Hollis, a senior middle linebacker who has started since his sophomore year, is a top-end prep linebacker. Tough, athletic, powerful, savvy, Hollis knows this defense better than anyone and will lead the defensive unit in 2016. Seniors Rayfe Ritchey and Josiah Johnson will fill the other two linebacker roles.

Part of what made Spain Park so tough last year was its stingy defense. The Jaguars gave up just 10 points per game on the year last year, and held opponents to seven points or fewer in eight games. Raney was the defensive coordinator at Hoover for three years before being offered and accepting the Spain Park job in 2013, and played strong safety for Northwestern Oklahoma State back in his college days as well, and is a known defensive guru. While the offense may take some time to hum, the defense from the jump should be formidable even with the loss of Young and Tibbs.

Way-Too-Early prediction: Usually, losing the top linebacker, offensive lineman and defensive lineman as well as a quarterback and running back and a top-notch special teams duo from any one team would be enough to tamp down expectations for the following season. However that is not the case here with Spain Park. This defense is still loaded with experience and talent at key positions and will keep the Jags in games while the offense gets its bearings.

Hoover is going to be every bit as good if not better than it was a season ago, and the Bucs will definitely be out for blood on Sept. 9. While Thompson, Vestavia, Oak Mountain and Mountain Brook will all be improved from last year and are definitely capable of beating the Jags on any given night, it’s hard to see this Spain Park team finishing any worse than 8-2 in the regular season. Spain Park won’t go through the regular season unscathed, and will drop one or two in that span, but the Jags will easily return to the playoffs, where they will once again make a push for a state title.