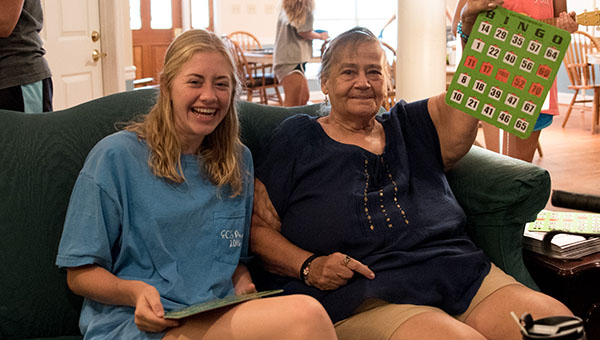 HELENA–Several shouts of “Bingo” could be heard at Helena’s Maplewood Lane Assisted Living facility on Wednesday, July 27, but this wasn’t any ordinary game of bingo.

Around 25 members of Helena’s Christ Community Church youth group came together July 26-28 to participate in serve week and the morning of July 25, the youth group members came to spend time with senior citizens at Maplewood by playing bingo, singing songs and spending a few hours serving the community.

The faces of the residents at Maplewood lit up as they heard songs and interacted with the members of the youth group, which range in age from 7-12 graders.

Maplewood resident Jo Standiford played bingo and enjoyed seeing the kids who took the time to visit with her.

“All the kids were so great and they were all so sweet and friendly,” said Standiford. “We need more kids like that. They were all very good and hardworking.”

Stokes Skellie has been the Christ Community Church youth director for the past 10 months and he said his favorite part about the week is just being able to serve citizens in the community and interacting with people.

“A lot of times people here don’t have a lot of interaction with people and it’s nice for us to provide light to their day,” said Skellie. “I think they enjoy seeing the younger generation and you can see in their faces when they light up. It’s just nice to be able to share the love of Jesus Christ.”

In addition to serving at Maplewood Lane, the youth group members also spent time at the Lee Apartments in Helena where they played kickball and other games with younger kids in the community.

Upcoming senior youth group members Anna Grace Monroe and Tyndall Cunningham both shared their thoughts on the week and why they like to serve.

“I love talking to people and hearing their stories,” said Cunningham. “I think a lot of times people ride older people off as their older and you can’t really listen to them, but it’s really cool to sit down and listen because they have so many years of experience. You can learn a lot and they’re hilarious.”

Monroe echoed much of what Cunningham said but her favorite part is getting the reactions from the senior citizens.

“Looking over and seeing the smiles on their faces and them laughing and having fun and interacting with us was great,” said Monroe. “One lady in one of the songs we were singing, I looked over and she just had her eyes closed and she was humming along to the music so that was so refreshing and nice to see.”

Christ Community Church Worship Center is located at 3500 Shelby County 52 in Helena and the youth group meets every Wednesday and Sunday night.

For more information on the church, visit Cccbham.org.