Tattersall Park development could be revisited 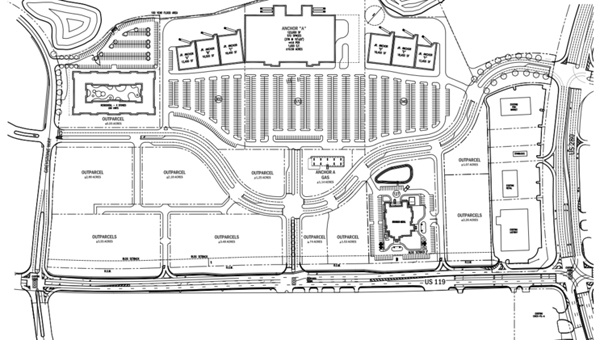 A site development plan for Tattersall Park, which would be located at the corner of U.S. 280 and Alabama 119, found at RBYRetail.com includes several commercial sites, a school and several outparcel lots.

Plans to develop property at the corner of Cahaba Valley Road and Greystone Way could be resumed.

The Hoover City Council set a public hearing for Aug. 15 for rezoning of the property, which is owned by EBSCO.

The rezoning would be for 18 acres of a 78-acre site. The 18 acres are not zoned, and the request is for the property to be zoned “Community Business District,” which would bring it in line with the rest of the site.

No plan for the site was submitted to the city along with the zoning request, though EBSCO originally had plans for a mixed-use Tattersall Park development, with mid-rise office buildings, townhomes and lofts, a hotel and a move theater.

Richard B. Yeilding of RBY Retail said plans for the site call for no residential space, as originally planned, but said there is no timeline for development.

“That would be subject to deals being made with retailers that would be a part of the project,” he said.

An EBSCO representative said there are no plans for the property beyond the requested rezoning.

The Helena police and fire departments will host National Night Out on Aug. 2 from 6-9 p.m. Residents can come... read more