Bridging the gap: Residents and police work to improve relationship 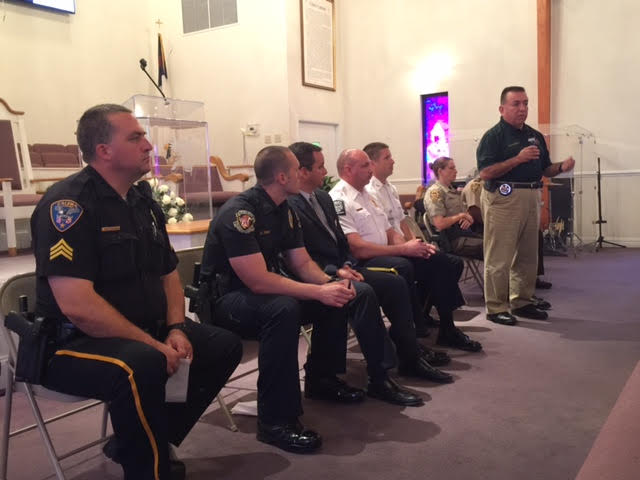 CALERA – Law enforcement, clergy, educators, community leaders and residents throughout Shelby County gathered Saturday, July 30, at New Mount Moriah Missionary Baptist Church to start a dialogue about how to bridge the gap between the community and law enforcement.

The Rev. Mike Jones, pastor of New Mount Moriah, said the goal of the town hall meeting, Police and People Partnering for a Common Cause, was for law enforcement official to answer questions and address concerns, and for everyone to leave with ideas about what they can do to make a positive impact.

Fifty to 60 people, including law enforcement officials from the Alabaster, Montevallo and Calera police departments and the Jefferson and Shelby county sheriff’s offices, attended the town hall meeting.

In light of the recent deaths of police officers and African American men, the Rev. Kenneth Dukes, Shelby County NAACP president and pastor of Holly Grove Baptist Church in Jemison, said it’s imperative for the Shelby County community to create a “new normal” when it comes to police interactions.

He said for many African Americans, fearing the police is instilled at a young age by growing up hearing their grandparents’ and parents’ personal stories of police brutality and injustice. He said it’s important for the African American community to overcome that fear and start viewing police officers people are there to protect.

Dukes said he believes that the majority of law enforcement officers in Shelby County are good cops and only want to do good, but he said sometimes there’s bound to be a bad cop in the group. In those cases, he said the community needs assurance that those in positions of authority will take action.

Montevallo Police Chief Jeremy Littleton said a part of his job as police chief is to mentor younger officers, teach them how to be professional and how to do the job the right way.

“If there is a bad cop in our profession I want them out quicker than anybody else because they make me and the entire department look bad,” he said.

If residents believe they haven’t been treated unfairly by a police officer, Littleton said the proper action to take is to file a complaint against the officer. He assured the audience that if a complaint is filed it will be thoroughly investigated.

Calera Police Chief Sean Lemley said sometimes it might seem like excessive force is being used when multiple officers take down one person, but he said it actually causes less injury to the officers and the person being arrested.

“It’s going to be a knock-down drag-out fight if it’s just one-on-one with me and the person I’m arresting, but if two more officers get involved, somebody can grab an arm and a leg and get the situation under control a lot quicker,” he said. “I understand that it might look bad with 3 cops on one person, but ultimately it causes the least amount of harm to everybody involved.”

A woman in the audience commented that her six-year-old son is afraid of police. She said often times she and her son only see police in her neighborhood is when something bad has happened.

Lemley said a good way to help ease that fear is for parents to visit their local police stations so that their children can interact with police in a peaceful, non-confrontational way.

“The police station is always open,” he said. “Just stop by so your kids can see what we do and talk to us. Or if you see a police officer at a gas station walk over and introduce your children to them. I promise, 99.9 percent of the time that officer is going to greet you with the biggest smile.”

In Calera, Lemley said it’s difficult for officers to get to know the residents in the neighborhoods they patrol because there is rarely enough time to do so. On average, he said five to seven officers patrol the city every day.

Jefferson County Sheriff’s Office Community Outreach Deputy Debbie Sumrall said a lot of law enforcement agencies have recognized the need to build stronger relationships with the communities they serve, which is why some agencies have created community outreach positions.

When it comes to racial profiling and targeting people of color, Shelby County Drug Enforcement Task Force Commander Lt. Clay Hammac said officers can’t arbitrarily stop a vehicle because “it does not fit into a certain neighborhood.”

“If we are aware of a high crime area, we are going to focus more efforts in that area, but we are not targeting people,” he said.

Hammac explained that there are areas of Shelby County that have higher rates of crimes and drug activity, so there will be more police presence in those areas. He said crimes are less likely to happen when officers are present.

Shelby County Sheriff John Samaniego called for residents to play a bigger role in reducing crime in their neighborhoods. He said residents should have the mentality of “If you’re going to sell it, we’re going to tell it.”

“We need residents to report when something is going on,” he said. “Without the community buying in, it’s a lot harder for us to do it (reduce crime). We’re definitely still going to try, but it is harder.”

Jones, New Mount Moriah pastor, said Saturday’s discussion is only the first step to improving communications. He said more panel discussions will be help in the future to continue the dialogue.