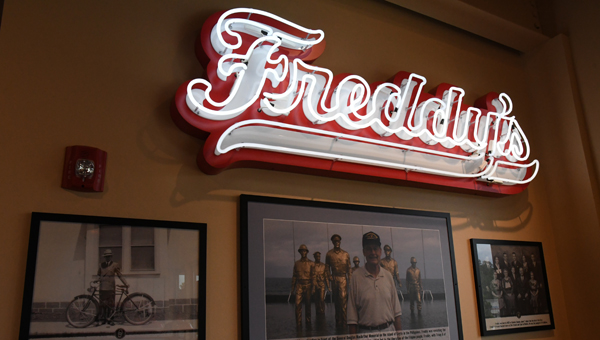 The restaurant features memorabilia from its namesake’s youth and military service. (Photos by Stephen Dawkins)

Freddy’s Frozen Custard and Steakburgers may be an unusual site in Alabama, but the manager at the Hoover location hopes to help make the restaurant a staple.

The chain is based in Kansas and has numerous locations across the country but is less common in locally, as the next closest location is Douglasville, Ga.

“People love it,” Naccari said. “Kids love the environment, and older people like it too.” 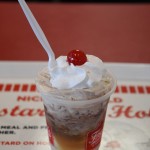 The Signature Turtle is one of the specialty frozen custards offered at Freddy’s.

Freddy’s was co-founded by brothers Bill and Randy Simon and their friend and business partner Scott Redler. The restaurant was named after Bill and Randy’s father, Freddy Simon, a World War II veteran.

“They opened the restaurant to make hot dogs and hamburgers the way they do at home,” Naccari said.

The restaurants’ designs resemble old-time diners, and photos from Freddy Simon’s youth and time in military service adorn the walls.

Naccari said many people locally have not tried frozen custard. She described it as creamier and less dense than ice cream. It is more egg-based than ice cream, and the production process allows no air to enter the custard.

Custard specialties include the Signature Turtle, which is served with hot fudge, hot caramel, toasted pecans, whipped cream and a cherry.

Freddy’s will sell custard cakes, which are made from scratch in the restaurant, with 24 hours notice.

The steakburgers, meanwhile, are never frozen. Naccari said the burgers are flattened to produce an almost crispy edge, and are typically served with mustard, onion and pickles unless customers request otherwise—and with shoestring fries.

“We don’t have a huge menu, but we do things right,” Naccari said, incuding preparing produce fresh in the restaurant and cooking food to order. “We serve a good quality product that’s fresh and hot.” 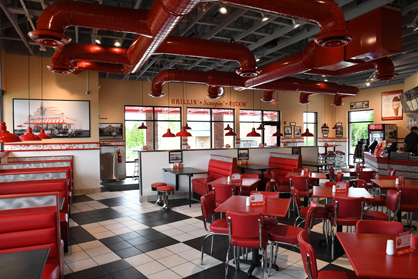 Freddy’s is reminiscent of old-time diners.

Naccari said the restaurant focuses on children, including selling T-shirts for $10 that, when worn into the restaurant, allow children to receive a free custard sandwich or cone with a combo meal.

The restaurant will also sponsor “spirit nights,” when 15 percent of sales on a given evening are donated to a school group, for example.

Naccari said the Hoover restaurant is looking for employees. To apply, or for more information about the restaurant, call 739-2282.

Much more about Freddy’s can be found at FreddysUSA.com.