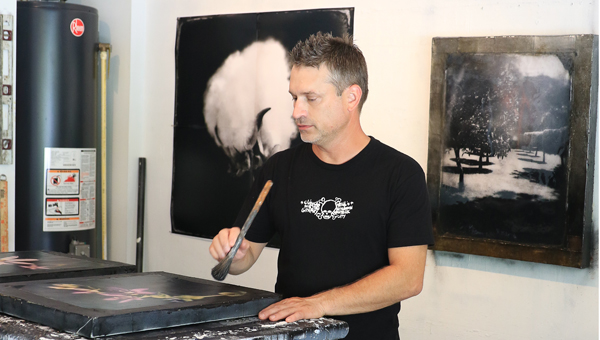 Get lost in a simpler time where towering trees lined dirt roads and letters were handwritten through David Diodate’s artwork.

After living in Atlanta for more than 20 years, Diodate moved to Alabama eight years ago — with the past six being in Hoover.

But it was when he was a junior in college 25 years ago that he first became interested in creating art. And after Diodate and his friend took (and did well in) art history courses, they applied to the University of South Florida’s art history program.

From there, he began exhibiting art in 1992 after a program in Paris, and his passion and pieces have grown from there.

He describes his artistic style as southern gothic, nostalgically modern, introspective and with a “tinge of historical.” Most of his current work involves shooting southern, rural places and things.

The piece “Past Years” showcases a stunning tree, while “Throve” takes viewers down an old, scenic dirt road.

There’s not one piece that’s his favorite, but instead, he likes them all for different reasons.

His pieces are stunning focal points that will quickly become conversation pieces, as well. Diodate says he gets his inspiration for the artwork from his past memories.

“Mostly of the old homes I remember going to as a child — my grandmother’s old farmhouse or my great aunt’s 100-year-old cabin, lost in south Georgia’s back roads,” he says. “I remember the light and darks of those places: shadowy rooms, empty pecan orchards, abandoned barns, decades of decaying paint.”

He has also been influenced by major artists like Sally Mann, Doug Starn, Mike Starn and Lawrence Carroll, he adds.

People can find Diodate’s artwork at Gallery 1930 + Scene and the Market at Pepper Place. For more information, visit Diodatestudio.com or search for him on Facebook and Twitter.

Back-to-School, Back to Health