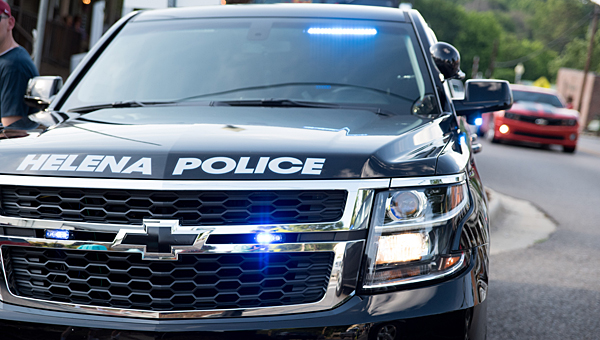 The Helena Police Department earned praise for its community policing initiative in a website’s recent list of the safest cities in Alabama. (File)

Three Shelby County cities have been named among the safest in the state by a nationwide consumer advocacy website, and their police departments have earned praise for working to keep residents safe.

Helena, Pelham and Alabaster were included on a list of “Safest cities in Alabama” compiled by Creditdonkey.com in early July. Helena came in at No. 2 on the list, Pelham placed No. 11 and Alabaster came in at 16th.

When compiling the list, the website based its rankings on the Federal Bureau of Investigation’s Uniform Crime Report for 2014, and considered violent and property crime for all Alabama cities with more than 2,500 residents. Violent crime includes offenses such as murder, rape, robbery and aggravated assault, while property crime includes offenses such as burglary, larceny, motor vehicle theft and arson.

“Folks here have their sights focused on improving its future, and keeping crime to a minimum is a big part of that vision,” read Helena’s entry. “To do so, the Helena Police Department employs a community-policing approach, actively encouraging involvement from citizens to prevent bad things from happening.”

“Residents of Pelham take pride in their city’s reputation for safety, as does the local police department,” read Pelham’s entry. “The police officers here are open to meeting with residents to educate them on how they can stay safe through observation skills and communication with the department.”

“Alabaster is a popular Birmingham suburb, attracting close to 32,000 people who are putting down roots here. They’re staying for the low unemployment rate and the close-knit feel that’s challenging to achieve amid a high population,” read the city’s entry. “The police department is tasked with protecting each and every resident, and Alabaster’s ranking in the top 20 suggests that they’re doing a great job.”

AB&A Reservoir. Steam locomotives needed plenty of water, and C.T. Davidson knew it. He built this reservoir to service the... read more