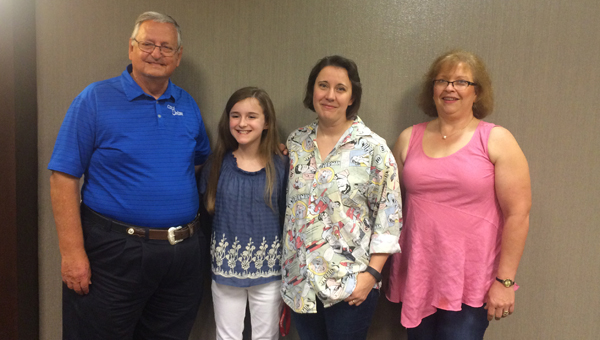 This year the library received tremendous growth from past summers, with 184 kids registered and 833 total attendees for just the reading program alone. A big reason for this was the library’s decision to try a unique way to reach teens by bringing in ‘A Minor Film School.’

“We’re bursting at the seams,” said library director Dana Polk. “There are more people finding and using us than ever and it just makes us so happy.”

The film school, taught by Rachel Ivey, showed students how to film and edit a movie trailer by solely using their mobile device.

“They weren’t allowed to use templates or any other device, everything was done themselves on their phone or tablet,” Polk said.

There were a total of 45 teens in the summer reading program and 13 of them entered into the film contest, which was split up into three different categories: comedy, mystery and sci-fi.

Each category had a winner that received a prize for their efforts.

In the comedy category, Isabella Trent won for her trailer, Identity Crisis and received a tripod as her award.

The Mystery category saw Steven Curren win for his trailer, Tale of the Lost Dog. He was awarded a microphone that adapts to mobile devices.

Finally, the Sci-Fi and overall viewer’s choice winner went to Betsy Samuelson and Rachel McRae. Each of them received a $50 iTunes gift card for their first place finish.

“I really liked picking out the music and editing,” said 11-year-old Samuelson, who will be entering middle school this year. “I loved changing something normal into something completely awesome.”

Samuelson said the idea came to her when she was at Treetop Family Adventure and won an alien duck in one of the claw machines.

“I never have any reason to use whatever I get in claw machines, so I decided that I should use the alien duck as my main subject,” she said.

Samuelson said it only took her about an hour and a half to put the whole thing together, 15 minutes to film, 15 minutes to edit and an hour to add music.

“I enjoy making movies because I like to make people laugh; that may sound cheesy, but I love it,” Samuelson said.

She also mentioned that she thought just using a mobile device was cool.

“I think I would’ve been bamboozled with anything bigger.”

The public library influenced and educated so many young kids in unique ways this summer. Polk made sure to thank the City Council for their continued support and the many grants they have received, which has helped their growth.

The Greater Shelby County Chamber of Commerce is partnering with other area organizations to hold several candidate forums over the... read more