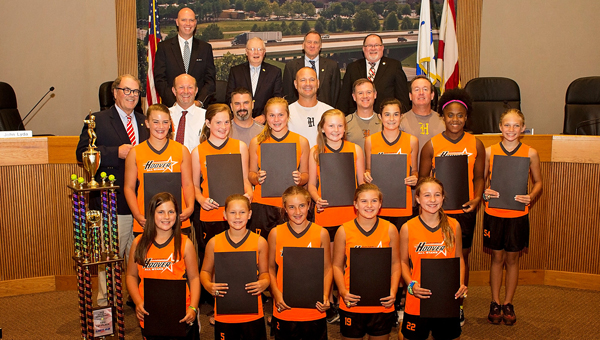 The Hoover Strykers 12-and-under all-star softball team is on top of the world.

The team won the United States Specialty Sports Association World Series the week of July Fourth and was recognized for the accomplishment during the Aug. 1 meeting of the Hoover City Council.

Each member of the team was presented with her own copy of a proclamation adopted by the Council.

“The hard work, commitment and dedication of the team, as well as those in leadership positions, is greatly admired and appreciated by the city of Hoover,” the proclamation read in part.

The proclamations will join the large championship rings and trophy the team has already collected.

John Parker, president of the Hoover Softball Association, said the competition was stiff at the World Series.

“They work hard all year long playing the game they love,” Parker said about the all-stars.

The Strykers performed well enough in two pre-area tournaments to advance to the area tournament at Liberty Park, where they won the area championship.

The team finished third in the state tournament in Pelham and advanced to the World Series, which was held in Gulf Shores.

Hoover’s team defeated a team from Hueytown twice, 12-2 and 13-6, in the championship series.

“We played lights-out in those games,” assistant coach Peter Hardin said. “It was a very good experience. They were an outstanding group. We had so much fun.”

Hardin said the girls were familiar with each other from previous local competition and bonded well as a team.

At the Council meeting, Clark thanked city officials for their support.

“We play all over, and there’s no park as nice as Hoover’s,” he said.