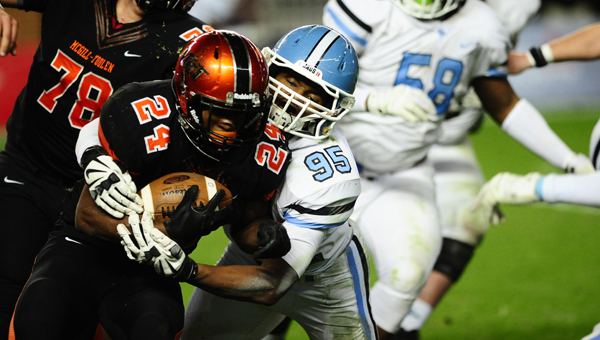 The Spain Park Jaguars are ranked as the preseason No. 5 team in 7A. (File)

The ASWA high school football preseason poll was released on Aug. 3, marking the first look at where some of the top teams across the state  . Only two teams from Shelby County made the preseason polls for their respective classifications in Spain Park and Montevallo, while Briarwood also received votes as well.

Spain Park, which finished the 2015 regular season as the No. 1 team in 7A and fell just short of a 7A state title, heads into the 2016 regular season ranked as No. 5 team in the classification. The Jags received 169 total points in the inaugural vote, placing them five points ahead of Bob Jones and three points behind Central-Phenix City. Hoover, Spain Park’s biggest rival, came in as the No. 3 team in 7A in the first poll, while McGill-Toolen, the defending 7A champions, came in at No. 1.

Spain Park is replacing its quarterback, top rusher, top linebacker and top offensive and defensive linemen, as well as the best punting and kicking duo in the state from last season. For most teams, that would signal a down year is imminent, but that is not the expectation for this Jaguar bunch. Nine of the 11 starters on this defense will be seniors, and the offense will be led by senior phenom Larry Wooden at the running back position. Expectations are high for this Jaguar bunch.

Montevallo, which finished 9-3 in 4A last year and won a home playoff game for the first time in more than 20 years, has been knocked down to 3A this season and is ranked as the No. 7 team in that class entering the year. The Bulldogs are in the same region as Gordo, which is ranked second in 3A entering the season, and American Christian Academy, which is not ranked but received 22 points in the vote.

The Bulldogs return senior quarterback Zac Oden, who was a 4A ASWA Honorable Mention selection a season ago, as well as senior Tre’Shawn Brown and juniors Ahmad Edwards and Daqwan Bryant. Brown played primarily in the defensive backfield this year while Edwards and Bryant split time evenly between offense and defense, but this season all three will see action on both sides of the ball as the Bulldogs will look to make another playoff push.

The ASWA prep committee votes each week during the season on the top 10 teams in each classification.