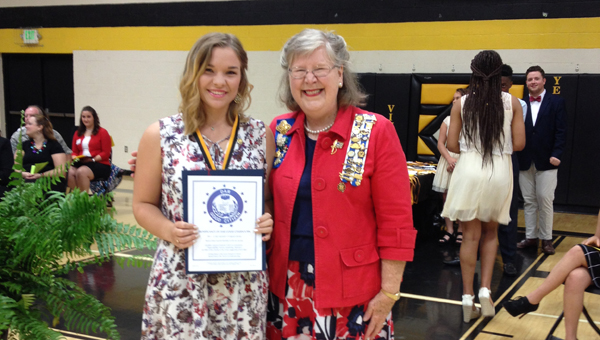 Vincent High School senior Riley Brasher was awarded the DAR Good Citizenship Award along with other seniors in Shelby County schools. Pictured are Brasher and regent Phoebe Robinson, who presented the award. (Contributed)

The David Lindsay Chapter of the Daughters of the American Revolution recognized deserving students for exemplary citizenship at Shelby County schools at the respective awards day programs.

In 1934, the DAR desired to recognize students who exemplify the qualities of good character, leadership, courage, service, dependability and patriotism and established the DAR Good Citizenship Award, which is given to a graduating senior from a State Board of Education accredited school.

The following students received the DAR Citizenship Awards presented by members of the David Lindsay Chapter.