HOOVER – Hoover’s National Night Out allowed the community to interact with public servants in a fun environment.

The event was held Aug. 2 at SuperTarget at The Grove Shopping Center, with hundreds of residents coming out for food, a car show, a demonstration by motorcycle officers and displays by public service agencies. 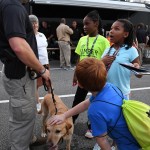 “We feel that this event is important because it provides a way for us to interact with the people we serve in a relaxed, fun-filled environment,” said Lt. Keith Czeskleba with Hoover Police Department. “Often times, our main interaction with people is when they have called us for service or are experiencing some type of emergency, and National Night Out provides us with a chance to talk with folks outside of those situations.

“Our main goal is to let the citizens we serve meet with our officers, express any questions or concerns they may have, and to showcase some of the equipment the police and fire Departments use to help us do our job. It also gives us a chance to say thank you to the community members for their support.”

This is the seventh year Hoover Police has participated in National Night Out.

Food was provided by Target and the city of Hoover, which sponsored the event.

Brothers Asher, Bryson and Caleb Piennette seemed to be impressed with everything about the event.

Five-year-old Asher said his favorite part was the firefighters.

“I like how they put out the fires and save the day,” he said.

Bryson said he got to hold a big gun, which was especially interesting because his uncle is in the military.

“Pappy” Brook held a large American flag during the event as a show of support for law enforcement and the country.

“I’ve been doing this around town,” Brook said. “I can’t name all the places I’ve been. I always get a good reception.”