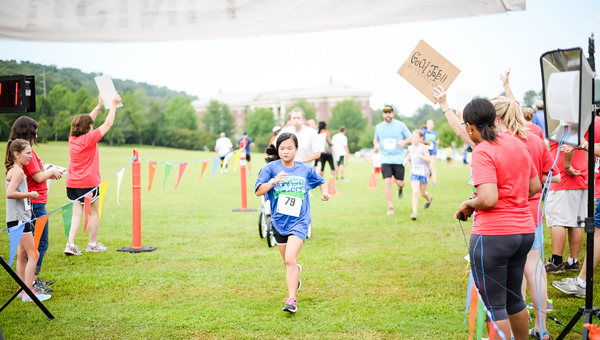 Poppy Christenberry crosses the finish line during last year’s R(un) for One 5K and 1-mile Fun R(un). This year’s event will be held Aug. 20 at Veterans Park next to Spain Park High School.

HOOVER–The fifth annual R(un) for One 5K and 1-mile Fun R(un) will offer a scenic course and opportunity to benefit a worthwhile cause.

“We’re expecting more than 700 runners this year,” said Krystal Brummitt, Lifeline Children’s Services of Alabama events manager. “That’s our goal. We’re trending ahead fairly significantly of where registrations have been in the past.”

Brummitt said there were between 550-650 participants last year.

Participation in the fun run costs $15 if registered beforehand or $20 the day of the run.

Also, runners who register on the day of the run are not guaranteed a T-shirt, which is always a hit among participants, according to Brummitt.

Registration can be completed online at RunSignUp.com/race/al/Birmingham/runforoneal.

Food including granola bars, smoothies, bagels and more will be provided for runners. There will also be a DJ, Brummitt said.

For those registered in advance, packets including coupons, information about sponsors and other goodies can be picked up from 11 a.m. to 6 p.m. on Aug. 19 at Trak Shak, located at 4740 U.S. 280.

There are more than 153 million orphans worldwide, according to Lifeline, and many of the children are labeled “unadoptable” because of age, special needs or life circumstances.

“What about all the kids who are not going to be adopted?” Brummitt said. “Our mission statement is: ‘(un)adopted exists to provide a hope and a future for orphans around the world by facilitating a safe environment to disciple and equip children in need.’

“We say ‘Run for One’ because you are running for one child that is not going to be adopted, for them to have life and education skills to care for themselves when they get older but also to bring about community transformation.”

Anyone with questions about the run should contact Brummitt at 967-0811 or krystal.brummitt@lifelinechild.org.