Changes ahead for Chelsea politics 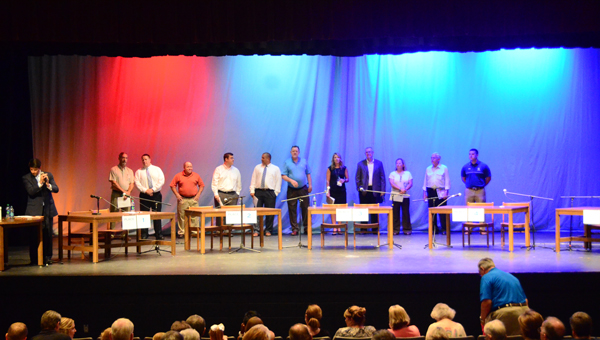 Chelsea City Council candidates addressed residents of the community on Thursday, night at a political forum hosted by the CBA. At least four places on the city council will see a new face. (Reporter photo)

CHELSEA – There is big change coming to the landscape of Chelsea politics. The city will be replacing at least four city council members and possibly all five, as well as Mayor Earl Niven when the Aug. 23 election rolls around.

The Chelsea Business Alliance (CBA) hosted a City Council Political Forum last night at Chelsea High School Auditorium to give the public a chance to hear each candidate’s answer to questions about road safety, taxes, bringing in new business and continuing the growth of Chelsea.

Each candidate answered three questions drawn at random from 11 different questions submitted by the public and then at the end of the forum they had five minutes to give a pitch as to why people should cast their vote for that candidate.

Before you cast your vote here is a little bit of information on each candidate’s beliefs.

With less than three weeks until the election, it was a big night for all 11 candidates to make one of their final pitches to the public. The mayoral candidates will get their chance to address Chelsea residents Thursday, Aug. 12 at the Chelsea High School Auditorium starting at 7 p.m.

The Alabama State Troopers responded to a fatal wreck on Interstate 65 just south of Alabaster on the night of... read more