Next ‘History Hour’ to focus on lesser-known historical figures 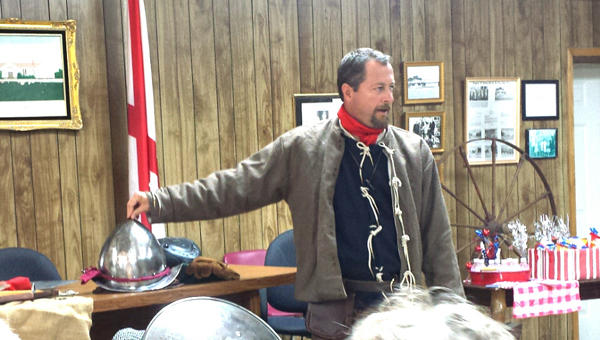 Harpersville Town Historian Shawn Baker talks to attendees during the July 19 Harpersville History Hour. The next and final presentation in the series is Aug. 16.

What began as an effort to commemorate Harpersville’s bicentennial has grown into a series of history lessons about Alabama.

“We’ve been trying to bring history to the people,” town historian Shawn Baker, of Old Baker Farm, said about three presentations in October and November 2015. “So many people don’t know the history of their own state. We take a history class in fourth grade, and that’s kind of it.”

The final Harpersville History Hour of the summer will begin at 6 p.m. Tuesday, Aug. 16 at town hall, located at 83 Town Hall Lane in Harpersville.

The session will focus on little known historical figures of Alabama. The first two sessions were on local family history and genealogy, and early local history and exploration.

Baker, who has taught history for about 25 years at Coosa Valley Academy, said another series could take place in the fall, and new topics would be covered each time.

“We’ll see where it goes from here,” Baker said. “We try to keep it fresh each time.”

Baker said he draws from resources including the Alabama Department of Archives and History and Fort Toulouse in Wetumpka.

Baker said the Aug. 16 session will focus on figures whose lives and connections to Alabama are relatively more obscure.

Subjects could include Jack Shackelford, a former state senator who led a group to fight in the Texas Revolution; William Bowles, a British loyalist who proclaimed himself leader of the Creek Indians and tried to form a Native American state; and Aaron Burr, the vice president who killed Alexander Hamilton in a duel and later fled across Alabama in an attempt to escape charges of treason.

Baker said the number of figures covered will depend on how much time is spent on each, as he wishes to provide enough time for attendees to discuss each topic and ask questions.

The first two sessions were well-received with as many as 50 people attending—both Harpersville residents and those from nearby areas.

The presentations are geared more toward adults, but all are welcome to attend.

Baker often makes use of period dress and artifacts/replicas during the presentations.

He helped found the group Voices of the Past, which participates in “living history” events across the Southeast and includes members from locations around Alabama.

The group focuses on history starting with DeSoto’s exploration up to the Civil War—including military campaigns and aspects of everyday life such as Native Americans and trade.

“I bring in clothing or everyday items or tools,” Baker said. “You see how hard it was to have that as part of your daily life. If you see it, it’s a little bit more real.”

For more information about Voices of the Past, visit the group’s Facebook page by searching “@voicesofthepast03.”

Pelham police reports for the week of Aug. 3,…