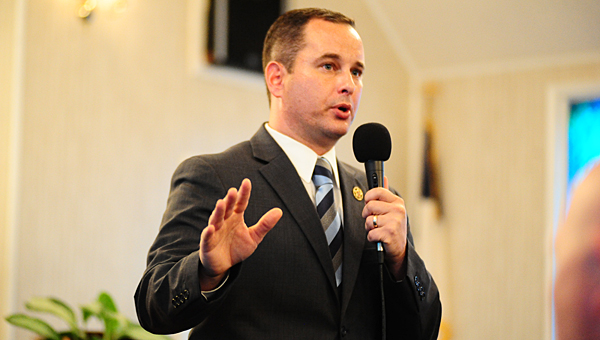 VINCENT – Shelby County likely will see an increase in its number of overdose deaths this year compared to 2015, as the use of drugs such as heroin, cocaine and methamphetamine continue to rise, the county’s deputy coroner told a group gathered at Vincent’s Coosa Valley Baptist Church on Aug. 4.

During the meeting, Shelby County Chief Deputy Coroner Lina Evans said Shelby County saw 29 confirmed drug overdose deaths in 2015, seven of which were tied to heroin. She said about 50 deaths were officially reported as natural causes, but likely had drugs as a contributing factor.

“This year, we’ve had 11 confirmed overdose deaths, and we’ve got 13 pending that I’m pretty sure are going to come back as overdoses,” Evans said. “That’s 24, which is almost beating last year’s number, and we’re just through July.

The meeting focused on keeping the community informed on current drug trends and sharing information to combat drug abuse, particularly among teens.

“We want people who are going to have an impact in the community to help keep our kids off drugs,” Lee said. “It’s way easier to turn a blind eye to it than it is to take a stance and do something about it. The best prevention is not starting drugs in the first place.”

Hammac said youth are increasingly likely to try marijuana, which he said often leads to other drugs, because they are “bombarded with a culture that says marijuana is not that bad.”

Hammac also said prescription pill abuse is rampant, and said “we’ve never seen anything like it.”

“A lot of the kids who become involved in dealing drugs, they’ve heard their whole lives that is all they could ever be, all they could ever do,” Hammac said. “We need to go back out into the streets and not only encourage our kids, but empower them to make better choices.”

FROM STAFF REPORTS Shelby County Schools Superintendent Randy Fuller is one of 20 school district superintendents from across the country... read more