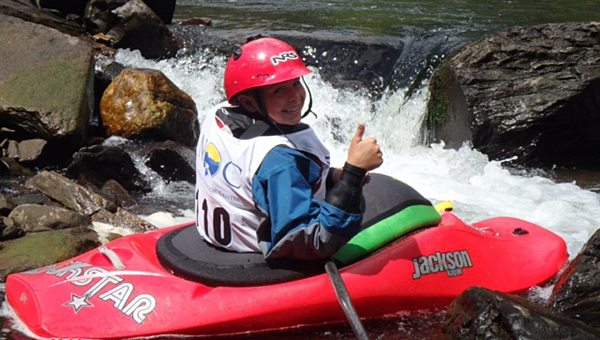 Daniel Jones recently earned a second-place finish in the 14U division of the Whitewater Junior Olympics, which were held on July 31. (Contributed)

By SAMANTHA HURST / Special to the Reporter
Whitewater splashed all around Daniel Jones as he flipped to a second place finish in the 14U division of the Whitewater Junior Olympics held July 31.
“Competing is always a lot of fun because you get to see what tricks everyone else is doing,” said Daniel
or Dano, as he’s known to family and friends.
Nantahala Racing Club hosts the 2016 Whitewater Junior Olympics on the Nantahala River in North Carolina each year. Dozens of kids 18 and under show up to compete.
Dano, of Helena, began competing in the event last year when he was 12. He was no rookie even then. Dano began boating at 5-years-old, according to his dad Ken Jones. Jones said he’s been into boating himself for 30 years and enjoys sharing the love with his sons.
“We taught him very slowly on a lake and he progressed from still water to rapids pretty quickly,” Jones said.
Nantahala Racing Club (NCR)’s overall goal since 1989 has been to encourage more kids like Dano to experience water sports.
The Junior Olympics offers competitive events for youth 18 and younger on a national level. These competitions include divisions for slalom, downriver and freestyle competition. Dano placed first in the 12U division of the freestyling event last year.
Dano latched on to “play boating” pretty quickly. In play boating, or freestyling, the kayaker finds a play hole where the water recirculates. This allows them to drop in the hole and use the current to do tricks.
To win a freestyle event, kids get 45 seconds to do as many technically difficult tricks as possible. Dano said they also try and make judges laugh. Imagine tricks with names like The Loop, McNasty and Phonix Monkey.
“The Loop is like a front flip in the boat,” Dano said. “So when I throw down the boat, I try to get as much air as possible. I try and get my body out of the water.”
Dano is also not bad at slalom boating. Earlier this spring he competed in the Alabama Cup and won two of the three events he competed in then.
“That’s his passion; he’s stopped most other sports to do this,” Jones said of Dano’s love of competitive kayaking.
It’s been a new way too for Dano to meet other kids with the same excitement for the outdoors. Jones said his son has met friends from all over the southeast.
For more information on NCR or the Whitewater Junior Olympics, check out Nantahalaracingclub.com.