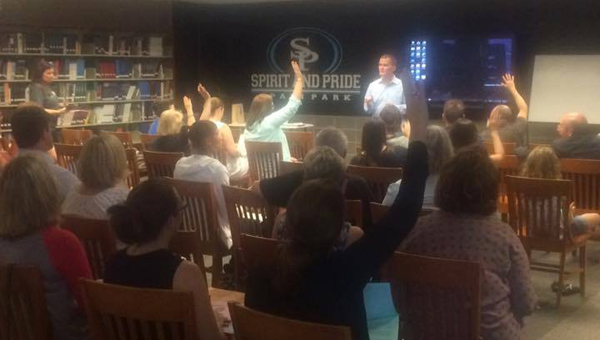 The first day of school is a challenge for everyone involved, but Dustin Chandler knows the challenge can be even greater for special needs students and their parents.

Chandler is the father of a daughter who has been diagnosed with a rare genetic disorder and is starting kindergarten at Rocky Ridge Elementary School this week. He organized the first meeting of the Hoover Special Education Community Alliance on Aug. 3 at Spain Park High School.

“We’re just trying to open up a good positive dialogue between the community and school administration,” Chandler said of the group’s purpose. “We want to work with schools to find solutions, if they can be found.”

“This is completely voluntary—just a bunch of parents and teachers,” he said. “There were some administrators there too, so they could hear what we talk about. We can always have better communication, and I think everyone agreed with that.”

Chandler said the group also included general needs teachers that have special needs children of their own, and residents that have no children in the school system.

“This is not a group of parents that is trying to demand anything from the city schools, but we think certain things and have opinions,” he said.

The group also talked about having programs during future meetings, Chandler said and added that he has already been contacted by parents of special needs students in Trussville about starting their own group.

The group plans to meet again in September, though no date has been set.

“I was encouraged when we left it up to the group about when we would meet again that they wanted to meet again so quickly,” Chandler said. “I think it was a well-received meeting. People want to be able to talk about this in a positive way.”