Calera: 1st day of school a mix of excitement, jitters 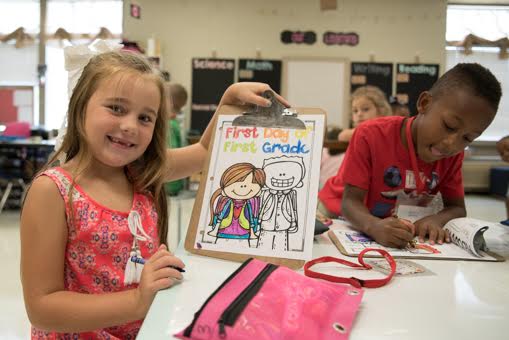 CALERA – There was a mix of emotions Tuesday, Aug. 9, on the first day of school at Calera Elementary.

Some kids – and even parents – walked into the first day of school ready to conquer a new school year, while others were a bit tearful.

“I think there has been more tears with the parents than the kids,” said Dana Martin, central office supervisor of school improvement and federal programs.

Each school in the Shelby County school system had a central office employee present on the first day to assist with whatever was needed. Martin said her morning consisted mostly of helping with carpool and assisting parents with directions.

Martin said it’s always exciting for her when she gets to visit schools.

“Working in the central office, we don’t get much face time with the students and their parents,” she said. “This is what really reminds us of why we went into the field of education.” 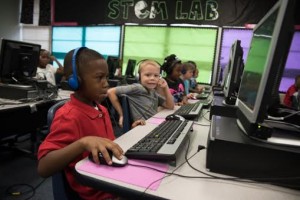 Aimee Totherow said her 5-year-old daughter, Ava Jade, shared while getting dressed that morning that she was feeling nervous. But Ava Jade wasn’t the only one with mixed feelings about the start of school.

“My mommy is kind of sad,” Ava Jade said. “She loves spending time with me.”

Franchesca Johnson, mother of 5-year-old Courtland, said the first day of Kindergarten was bittersweet for her, too.

“I’m excited for him, but I’m sad at the same time,” she said. “He is the last of five children to start school, so this is the last time I’ll be doing this.”

Courtland said he was excited to start school, but he was unsure of what to expect. His mother predicted he’d do well on his first day because he participated in the school’s Kindergarten Camp in July.

“I think Kindergarten Camp helped him get a lot of his nerves out, so he’s not too nervous today,” she said Tuesday.

Even though some tears were shed, Martin said the overall atmosphere was one of excitement and eagerness.

That excitement showed on the face of new Calera Elementary principal Genet Holcomb.

“This is a first for me, too,” Holcomb said. “This is my first time being a principal and it is so exciting to be in this role.”

Becoming the principal of Calera Elementary is a full-circle moment for Holcomb since she taught at the school 19 years ago as a teacher. In 1997 she left Calera Elementary and has spent the last 14 years as an assistant principal.

“There are so many things that are the same,” she said. “The community feel is the same, and it’s kind of like a time capsule as I walk through some of the classrooms that I used to teach in. What’s even better is that some of the people that I worked with years ago are still here.”

However, the school is a lot bigger than when Holcomb was a teacher there. In the years following, it underwent three expansions. The school educates about 680 students.

Even though the campus was overflowing with traffic, Holcomb said the morning went smoothly.

“Even with all the people and traffic, it’s 8:06 and it’s calm,” she said as the last few parents were leaving the building.

Holcomb noted that one of the best aspects of being an educator is that no matter what happened last school year, each new school year is filled with new opportunities to enrich a child’s life.