Chelsea election: Then there was one 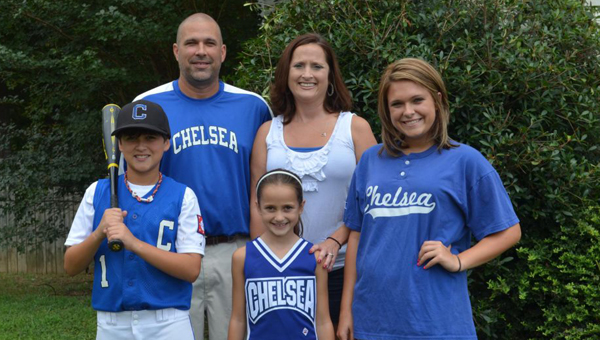 David Ingram, pictured with his family, is a long-time resident of Chelsea and has served on the City Council for the past four years. If re-elected, he will be the only returning member to the Council. (Contributed photo)

CHELSEA – Chelsea will be replacing at least four out of five Place’s on the City Council as well as electing a new mayor in the next two weeks.

David Ingram, running for re-election of Place 3, has a chance to be the only one still standing after the Aug. 23 election.

“Experience is important in this election, there is a lot to learn in government,” Ingram said. “I don’t know everything, but I have learned a lot over the last four years. First and foremost City Council needs a love and pride in Chelsea; I definitely have that. They also need to be proactive and not reactive, which I can bring to the table.”

Ingram was elected to the City Council in 2012 and has worked diligently over the past four years to help Chelsea grow.

He mentioned that the biggest accomplishment during his tenure has been improvements to the recreational facilities, especially the community center. Ingram said it is a good facility for everybody; senior citizens, kids basketball, church groups and adults.

Another one of those facilities he is proud of is the sports complex that should be finished by the end of this month.

“That will be big for the community,” Ingram said. “It won’t only give us a new complex, but we will also be updating the old one so that we can have both parks for use. That will give us opportunities to host baseball and softball tournaments.”

He also feels that being the only person with experience over the last four years, he will be able to help unify the new members of City Council and the mayor.

“Priorities change, but I think the first thing that needs to happen if I am re-elected is an understanding of the operating budget and financing of the city,” Ingram said. “No major decision can be made until the new mayor and council have an understanding of the operating budget. We are in a strong place financially, but don’t need to jump into any major projects until we can sit down and figure all of that out.”

As the Director of Finance for the Department of Pediatrics at UAB and with his experience handling the budget on City Council the last four years, he feels he can help everybody understand the financial aspect.

“The mayor has been great at managing the finances over the last 20 years, but with him retiring the entire council and mayor will have to work together to handle the budget. I have a tireless work ethic to get that done,” Ingram said.

“None of this can happen without sales tax base, 80 percent of our revenue comes from sales tax,” he said. “One of the first things I would like to see done is working with a retail recruiting firm to bring additional business to Chelsea. We never closed the loop on a firm over the last few years, but we can’t just sit back and wait for businesses to come to Chelsea.”

Other highlights from his past four years include:

Other things he wants done in Chelsea if re-elected:

“I’ve been serving the community for a long time and have enjoyed every minute of it. I want to be a part of continued progress in this city,” Ingram said. “It’s our job to improve the way of life or the way we live in Chelsea in all aspects. If that’s not what our goal is then we aren’t doing the right thing.”

By SAMANTHA HURST / Special to the Reporter As summer comes to a close, Helena Youth Sports gears up for... read more