Back to school: Mt Laurel Elementary 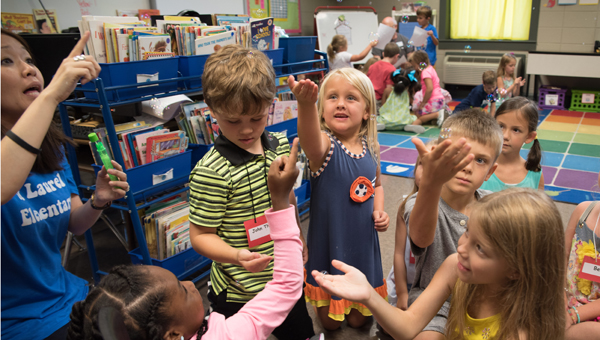 CHELSEA – Carpool lines were full, big yellow busses crowded traffic and kids were back to waking up early as summer break came to an end, and the new school year kicked off at Mt Laurel Elementary School in Chelsea.

Parents and kids poured into the school parking lot around 7:15 Tuesday morning as they were trying to get those first day of school pictures. The most popular spot being the stacked stone sign in front of the school.

Parent after parent walked up to the sign with their kid(s) and repeated the same thing, “I say this is the last time I’ll take this photo, but I end up coming back every year.”

Liz Sundstrong and her daughter Anja were two of those that couldn’t help but get caught up in the moment, since it was Anja’s first day of kindergarten.

She also said that she was sad to see summer come to an end.

“We went to the space center and the zoo this summer and it was really fun,” she said.

Sundstrong, who will be taught by Ms. Schwall this year, said she was really excited to meet her new teacher.

“She’s ready and we are excited for her,” Liz Sundstrong said. “She has been in daycare for most of her life so she’s used to the school atmosphere. It’s a happy day.”

Sundstrong wasn’t the only one excited for the first day of school; 8-year-old Lilly Brock, who will be entering the third grade, had a huge smile on her face as she walked toward the school entrance.

“This morning she jumped out of bed and said ‘Momma I’m excited, but what if I don’t make any friends today?’” said Lilly’s mom Sharon Brock.

Lilly Brock said her favorite part of summer was going to Six Flags and riding the log ride.

“We wanted to ride the river raft too, but Momma didn’t want to get wet,” she said.

Brock will be in Ms. DeMelo’s third-grade-class and said she is most excited to make new friends this year.

The other was a small little stuffed dog, whom she named Otis after the dog from “The Adventures of Milo and Otis.”

“I just wanted to bring him because I really love him,” she said.

“I’m really excited for her because she is really smart, so she will do well,” Sharon Brock said. “When she was younger she could name all of the military helicopters and other things of that nature, which just showed us how smart she can really be.”

She might have gone into school with an excited smile, but right before she walked in she looked back and said, “I’m going to miss the log ride.”

Cops: Man distributed pot while on bond for forgery