Helena Mills c. 1878. Benjamin Franklin observed that gristmills were the connecting links between agriculture and industry. 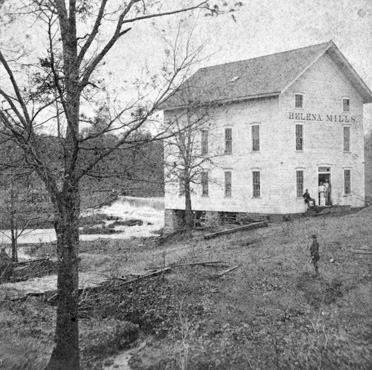 Gristmills were often the beginning of a village or town.

Progression from a millrace to a main street was a phenomenon that occurred all over America.

A few other ingredients helped Helena. The railroad, rolling mill, nearby coal mines and the gristmill were the recipe that produced the town.

Well before the Civil War gristmills operated in what would become Helena.

Marauding Union troopers under General James Wilson took great relish in destroying the mill, noting the event in their diaries.

In the mid-1870s, Richard Fell and Rufus Cobb reconstructed the gristmill at Helena.

Back to school: Mt Laurel Elementary