Have you ever noticed the large grayish blue bird along the water’s edge as you pass by the pond or creek?

If so, then you have seen the Great Blue Heron, Ardea Herodias, a large wading bird common in North and Central America, as well as the Caribbean and Galapagos Islands. 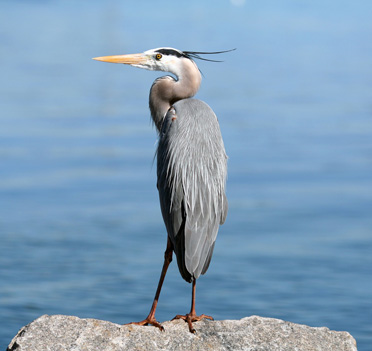 The Great Blue Heron is a large wading bird common in North and Central America and the Caribbean and Galapagos Islands. (Contributed)

The Great Blue Heron is a common sight along the edges of the lakes in Oak Mountain State Park.

Easy-to-see features of great blue herons include slate (gray with a slight azure blue) flight feathers, red-brown thighs and a paired red-brown and black stripe up the flanks; the neck is rusty-gray, with black and white streaking down the front; the head is paler, with a nearly white face, and a pair of black or slate plumes runs from just above the eye to the back of the head.

The feathers on the lower neck are long and plume-like; it also has plumes on the lower back at the start of the breeding season.

The Great Blue Heron is adaptable in its habitat, they are happy just about anywhere that there is a source of fish, though they will also eat insects, amphibians, small mammals and small birds.

Food is located by sight and often swallowed whole.

It is amazing that these wading birds will nest in trees or bushes along the edges of ponds and rivers instead of staying on the ground.

With four lakes and numerous streams in the park, we host large amounts of suitable habitat for these majestic birds.

Please remember that you keep Alabama State Parks open by visiting them. Thank you for your support.