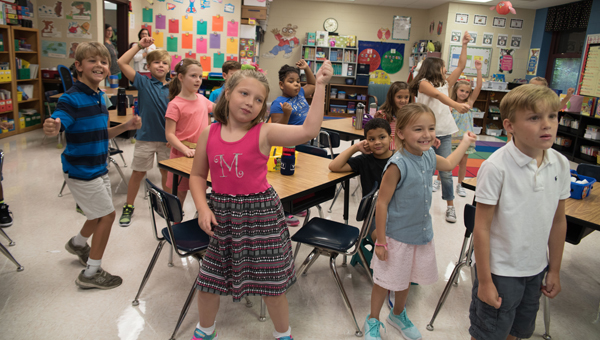 Carol McLaughlin’s class at Greystone Elementary School stretches their legs by dancing and singing songs on Aug. 11, the first day of school. (Photos by Keith McCoy)

HOOVER – While parents, teachers and administrators undoubtedly had a flood of thoughts racing through their heads, the first day of the school year at Greystone Elementary was simple for new kindergarten student Cade Underwood.

“I like my new computer,” Underwood, looking eager to get started in a white polo style shirt under a new backpack, said on Aug. 11 of the Chromebooks in classrooms at the school.

Despite Underwood’s singular focus, the day was one of conflicting emotions: parents torn about dropping off their children at school, a fresh start for the school staff including first-year Principal Stacey Stocks, and excitement and nervousness—even some tears—for students starting a new year with a new teacher and new classmates.

“It’s going to be a great year; good morning, everybody,” said Stocks as she greeted students.

Stocks was assistant principal at Greystone for three years and taught prior to that, so she is familiar with the people and processes.

“I’m looking forward to my first year as principal here,” she said. “We’re going to hit the ground running. It does feel a little different, but in a good way.

“This is the best school. We’ve got a faculty and staff full of people that care about the kids. That’s all it takes.” 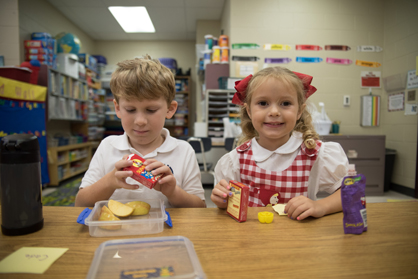 Kindergarteners Cade Underwood and Coline Hemphill takes a snack break on the first day of school.

The school has about 40 teachers and 40 more staff members responsible for everything from driving buses to after-school care and child nutrition.

They will educate about 525 students from Aug. 11 through May 26, 2017, with extended breaks for Thanksgiving, Christmas and New Year’s, and spring break.

Volunteer Courtney Cahalan, whose son Hudson is a fifth grader at Greystone, was among those guiding students to where they needed to go. Cahalan said the kindergarteners, especially, need a little help.

“They come in with a deer in the headlights look,” she said.

Another fifth grader, Jack Stewart, felt like an old hand, going through his sixth first day of school.

“This is my last first day at Greystone,” said Stewart, who also reminisced on a summer spent visiting the mountains, river rafting and ziplining but said he was excited about returning to school.

Stewart displayed wisdom beyond his years (11 of them) in offering advice for those just starting out: “Use your words kindly,” he said.