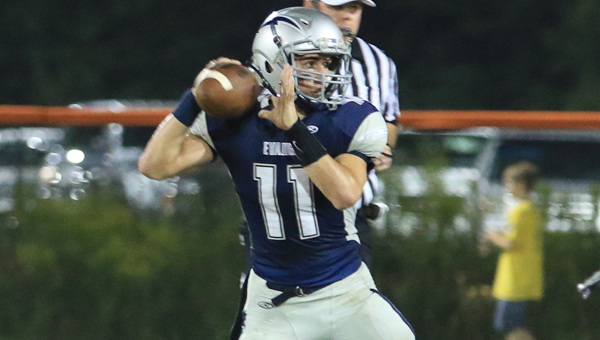 Evangel’s Micah Murphy had one of the most productive seasons in the history of Alabama football last season, and as long as he is on the field, the Lightning will be in a good spot. (File)

And here we are, finally at the end of the line. After this, truly the only thing left to do will be to actually play some football, which is a very exciting thing.  We have looked at the 11 AHSAA teams and the three AISA teams in the county so far, and the only piece of business left is to take a glance at the two ACSC teams in the county, Evangel Christian and Hope Christian, which are in for a pair of very interesting seasons.

The Alabama Christian Sports Conference is a private, non-profit organization comprised of Christian institutions including campus schools, homeschools and homeschool associations, per the ACSC website. Traditionally, the ACSC has played eight-man football, and the ACSC playoffs this year will still be under the eight-man football structure. However, back in December of 2015 the AISA Athletic Committee voted unanimously to allow AISA schools to schedule teams within the ACSC as acceptable nonconference opponents. With that decision, ACSC teams will now begin to transition into the 11-man game. This season, both Evangel and Hope will play both eight-man football and 11-man football, depending on the week and the opponent.

Evangel has been the cream of the crop in the ACSC recently, and that’s not likely to change this year. The Lightning have the two best players in the conference in senior quarterback Micah Murphy and senior running back Brad Baggett. Murphy by himself accumulated nearly 3,400 yards of offense last season alone, and is a legitimate college-level talent. Part of Murphy’s success last year was due to Baggett’s impact as well, and vice versa, but Evangel went 11-1 last year and averaged 54 points per game, largely thanks to these two. Truly, as long as these two remain healthy, they will not struggle with an ACSC opponent.

This year Evangel does have five AISA games on the schedule, and it will be incredibly interesting to watch the Lightning transition into the 11-man game. The Lightning are playing the first and last games of the regular season as well as the postseason in the eight-man format, but are playing the middle eight regular season games in the 11-man game. There is no real way to predict how Evangel will fare in the 11-man game having never played it before, but in most if not every game the Lightning play, they will still have the two best athletes on the field by an overwhelming margin.

Hope, by contrast, is coming off a tough 2-8 season. Traditionally an ACSC powerhouse, the Eagles are coming off one of the worst seasons in school history  and are hoping to return to form this season.

This Hope team is characterized by a number of kids who can play dissimilar positions, and will be asked to do just that this year. Elliot Bradshaw, for example, will likely see time at running back and on the offensive and defensive line this year. Bradshaw is a solid 6-feet-4-inches tall and weighs over 200 pounds, but has quick feet and has worked hard to get into running back shape.

In the wake of Colin Kirkpatrick’s decision to transfer to Spain Park, the quarterback job at Hope this year will be filled by some combination of Juan Cuellar, Josh Patton and/or Tyler Hubbard. Cuellar is the best pure athlete on Hope’s team, and will likely be asked to play a wide array of positions this season, while Hubbard stepped in at quarterback for a chunk of last season when Kirkpatrick was hurt. The two that do not end up seeing the majority of the reps at quarterback will play receiver and running back, depending on the situation.

The Eagles are moving to an option-based offense this year to better utilize the mobility of the offensive line and the athleticism of the backfield, and how the quarterback situation pans out at Hope this year will go a long way to determining whether or not the Eagles can get back on track.

Way-Too-Early prediction: As long as Murphy and Baggett stay healthy, Evangel will be in every game they play this year and will likely win most. In the small taste of 11-man football Evangel has had to date, which came back in the spring in a jamboree setting at Jacksonville State, the Lightning beat Evangel Christian (same name) out of Montgomery 20-14 in a half of play before beating Kingwood 28-0 in the other half. The Lightning will win the ACSC going away this year, but it remains to be seen how they will fare in the 11-man game. Evangel will finish the season with an 11-1 record.

Hope by contrast is an incredibly young team. The Eagles have 11 total upperclassmen, and have seven players on the varsity roster that are not yet in high school. There is talent on this roster with guys like Cuellar, Bradshaw, Hubbard, Patton, Ethan Key, Felipe Minderhout and Jackson Davis to name a few, and this team will finish better than 2-8. How much better remains to be seen, and the Eagles won’t compete for the ACSC title for at least another year. Hope will finish this season with a 4-6 record.

Manyi Ati, former University of Montevallo volleyball standout, has signed a contract with Svelda Volley, a professional team based in... read more