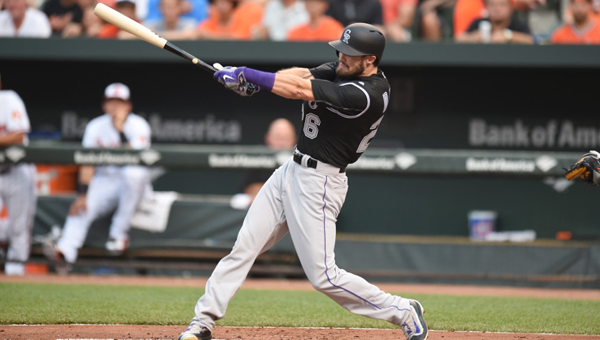 Oak Mountain alum David Dahl has taken his first MLB opportunity and run with it. Dahl, who was drafted with the 10th overall draft pick out of Oak Mountain High School in 2012 by the Colorado Rockies and has been working his way through the minor leagues ever since, was called up to join the Rockies from their AAA affiliate Albuquerque Isotopes on July 25, and has come onto the major league scene with a bang. Since joining the Rockies, Dahl has hit safely in his first 17 MLB games, which ties a 75-year-old major league record.

On Aug. 11, Dahl singled in the first inning of the Rockies’ 12-9 win over the Texas Rangers to tie the record. This came one day after Dahl tripled in the eighth inning of a game against the Rangers, which at the time gave the Rockies a late lead in that game before Texas came back to win in the ninth.

“Hey, all we expect of him is a hit in every game he plays. If not, then we send him back down,” Colorado Rockies general manager Jeff Bridich said about Dahl’s recent play, obviously joking, as reported by the Denver Post.

Dahl’s streak ties the record set by Chuck Aleno, who began his major league career with a 17-game hit streak back in 1941 as a member of the Cincinnati Reds.

As of Aug. 12, Dahl was hitting .358 with an on-base percentage of .394 through 17 games, and had accumulated a double, three triples and three home runs with an additional 10 RBI.

Evangel’s Micah Murphy had one of the most productive seasons in the history of Alabama football last season, and as... read more