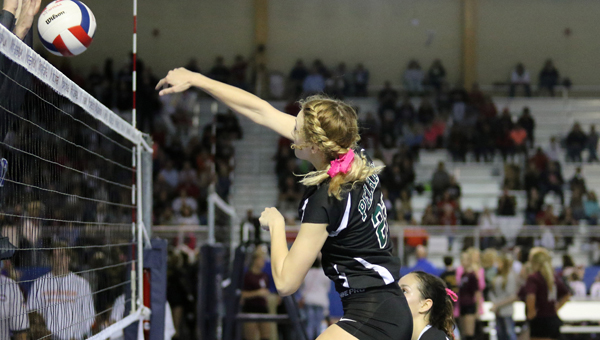 Pelham is set to start the 2016 volleyball season with a home match on Aug. 25 against Vestavia Hills. (File)

This week marks the start of the 2016 sports calendar. Football is back and is going to take up the majority of the sporting discussion over the next few months, but that does not mean it is the only sport taking place this fall. Cross-country for one is set to start in a few days’ time with abandon, as is volleyball. Volleyball in Shelby County has long been competitive, and there were a large number of Shelby County schools that made an appearance in the 2015 AHSAA volleyball state championships. Let’s take a quick look at when the volleyball season is set to start for the 5A-7A schools.

The Lady Eagles from Oak Mountain, who finished last season with a 37-12 (4-2) record but lost to Thompson in the first round of the 7A Area 5 tournament, start the season on Aug. 25 with a match against the dynasty that is Bayside Academy. The Lady Admirals have won a mind-boggling 14 consecutive state titles, the past eight at the 3A level, and only lost one senior off of last year’s team. Oak Mountain had a stellar season in 2015 despite the early exit, and a good showing against one of the state’s top powers to kick things off this year would go a long way for the Lady Eagles’ morale.

Just a few miles down the road, Spain Park is getting set to start its volleyball season as well. The Lady Jags finished the 2015 season with a 21-17 (3-2) record and lost to Vestavia Hills in the first round of the 7A Area 6 tournament, cutting a promising season short earlier than expected. The Lady Jags will start their 2016 journey with a home game against John Carroll Catholic on Aug. 25.

In Alabaster, Thompson is starting its 2016 season on Saturday, Aug. 26 at Hoover High School with the Juanita Boddie Invitational. The Lady Warriors started the 2015 season in a 2-7 hole before finishing 16-17 (2-4). Thompson made it out of area play before running into eventual 7A state champion Mountain Brook, which ended the Lady Warriors’ season.

Chelsea, which started the 2015 season 2-9 before finishing 21-19 (4-1) found its groove late in the season last year before dropping a match to Hartselle in the first round of the 6A Area 10 tournament. The Lady Hornets will start the 2016 season with a home match against Jeff Davis on Aug. 25.

Pelham, a perennial contender at the 6A level, also made an appearance in the 6A state championship field last season before falling to Arab High School in straight sets. The Lady Panthers finished last season with a 21-24 (4-2) record, and they will start this year with a home match on Aug. 25 against Vestavia Hills.