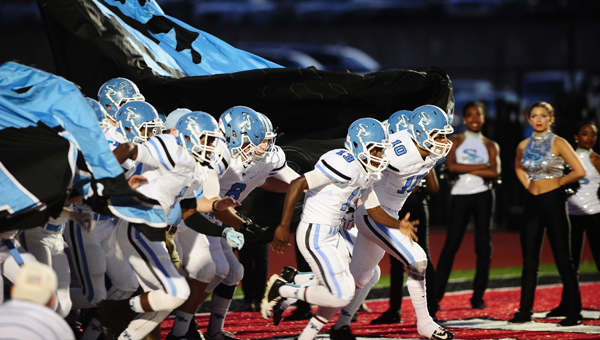 The 2016 football season kicks off this week with a full slate of games. Can Spain Park avoid falling into an 0-1 hole for the second year in a row? (File)

It’s time. It is finally, mercifully, thankfully time. After another long summer, football is back and there are actual, real games to talk about, which is very exciting. And where there are football games, there are usually largely unnecessary discussions about those games not far off, which is where we come in. Last season we had a weekly column previewing and predicting each week’s slate of games, and this season will be no different.

A year ago we picked 80 percent of the games correctly over the course of the regular season. You take those odds to the racetrack and you’re going home with money in your pocket and a smile on your face, that’s for sure. So, essentially, if you want to know what’s going to happen on Friday nights around the county before it ever even happens, this is the place to be. With that in mind, let’s take a look at the Week 1 slate of games. This week there are five teams playing regular season games and four taking part in jamborees.

The first in-county matchup of the season promises to be a good one. Oak Mountain and Chelsea have played four times to date, and Oak Mountain has won all four of those games. The most recent contest between the two, however, was back in 2013, and times have changed since then. Both Chelsea and Oak Mountain are working in a ton of new faces on the defensive side of the ball, and it may take a few games for both teams to get on the same page defensively. The Hornets will have one of the more explosive offenses in the county this year, however, and that should be enough to get the job done on the road in the first week of the season. Chelsea 24 – Oak Mountain 14.

The Jags are starting the 2016 season with a tough test on the road. This Gadsden City team, ranked No. 10 in the 7A preseason poll, is talented. The Titans finished last season with a 5-5 record and missed the playoffs, but that record is deceptive, as Gadsden City lost each of those five games by seven points or less and competed against top competition all year. With dynamic running backs Damon Williams and Jaelyn Flemming returning to the backfield and Division I prospect Toryque Bateman returning to the offensive line, this Gadsden City team will ground and pound with the best of them. It took Spain Park a game to get going last year, and if the Jags don’t come to play they could very well start in an 0-1 hole for the second year in a row.

But, that’s not going to happen. This Jaguar defense, although it suffered the loss of a few top playmakers from last year, is chock-full of senior playmakers. Shawn Raney is a top-notch coach, and Spain Park will be ready for the Titans on Friday. Spain Park 21 – Gadsden City 17.

Ramsay is coming off a respectable 7-4 season, and the Rams lost three of those games by eight points or fewer. The Rams, like Helena, have moved up to the 6A level after spending the last two years in 5A ball, and this will be the first game for both as 6A teams. As this is just a jamboree, neither team will want to overplay their hand, and the starters likely won’t play the entire game. Dual-threat senior quarterback Baniko Harley will lead this Ramsay team this year, and presents enough of a headache for any defense. Predicting a final score in a jamboree is kind of useless, but let’s just say the Huskies pull this out at home. Helena 21 – Ramsay 10.

Technically, this game isn’t being played at Homewood High School, but just down the road at Samford University in the First Annual Milo’s Breakfast Kickoff Classic. Homewood, fresh off a 9-3 season, is replacing 18 starters coming into this year, which is a gigantic number. But, this is still Homewood, and the Patriots are going to be competitive no matter what, as there is always ample talent on their roster. This Pelham team will be better than its 1-9 mark from last season, second-year head coach Tom Causey will make sure of that. However, the Panthers’ first win in 2016 won’t come on Thursday night. Homewood 28 – Pelham 21.

Like all of the other jamborees this week, the starters likely won’t play a full game. Vestavia is coming off a strong 9-3 season, and the Rebels beat Briarwood 14-0 in a jamboree at the start of last season to boot. Briarwood struggled last season to score consistently and only averaged 15 points per game, and while the Lions will be see an improvement in those number this season, it’s unlikely they get a win over Vestavia in this preseason contest. Vestavia 21 – Briarwood 7

The Eagles have the distinction of being the first team to play the newly-formed Mae Jemison High School Jaguars. Mae Jemison, which replaces JO Johnson High School, retained JO Johnson’s colors, nickname and players, and will look similar to Johnson in terms of the on-field product. Last year the Jaguars finished the regular season with a 7-3 record, but had to forfeit four games due to an ineligible player issue, and missed the playoffs as a result. That will no doubt motivate the newly-formed Mae Jemison Jags this year, and they have the talent to turn that motivation into success. Between running back/linebacker/tanker truck Daquon Godfrey, receiver and Troy commit Shon’Derious Sprallings and quarterback Brandon Crosby, this is a team to take seriously.

Calera by contrast, in Andrew Zow’s first season as head coach, is looking at a vacuum of offensive talent this season, which is new territory for the Eagles. Calera will win some games this year, but will drop this one on the road. Mae Jemison 28 – Calera 7.

The expectations for this Montevallo team are sky-high, and the Bulldogs come into the year as the No. 7 team in 3A. The Bulldogs put up more than 33 points per game a season ago, and the majority of that offensive production is back. While this one won’t count, the Bulldogs will get a win and move into the regular season on the right foot. Montevallo 35 – Verbena 21.

The Wiley McKeller era starts at Vincent on Friday with an hour and 20-minute bus ride to 3A Pleasant Valley for an interesting first game. In 2015, Vincent and Pleasant Valley combined to go 0-20 on the football field, and there is simply no telling what will happen between these two in the first game of 2016. The Yellow Jackets are going to be better than they were a year ago under McKeller, but it will take some time to be consistently competitive. Vincent is overwhelmingly young, with just three seniors on the roster, and a road game to start the year tips the scales in favor of Pleasant Valley in this one. Pleasant Valley 17 – Vincent 12.