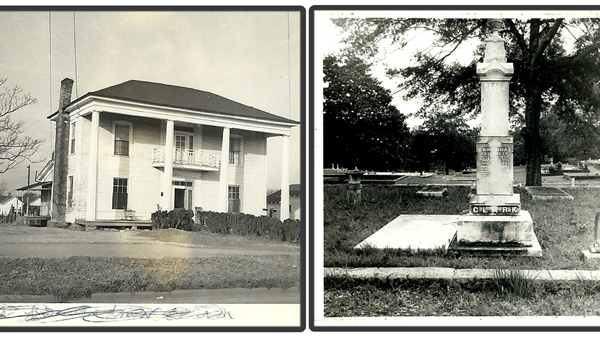 Family photographs depict, left, Clark Farm near Griffin, Ga. During the Civil War the home was not burned, but looted, and cattle, chicken and farm products were ravaged by Yankee soldiers on their march to the sea. (This is written on the back of the photo.) Right, Amanda Elizabeth Jefferson Clark, 1823-1894. “A consistent member of the M.E. Church from early childhood and the crown of our life. She hath done what she could.” (Contributed)

“My dad started it all back in the 1950s when he wanted to trace our Clark family’s lineage in America and confirm history which had largely been hand-me-down stories from generation to generation,” Colquitt “Coke” Clark relates. “His only tools and resources were cemetery records related to a large family plot in Griffin, Ga. (where he had been born in 1903), newspaper obits and articles, an old family Bible and personal visits to courthouses in North Carolina.”

Clark said the most intriguing story was they were direct descendants of Thomas Jefferson; however, nothing in Jefferson’s family history seemed to even remotely make this possible.

“About 20-25 years ago, and after my father’s death, I got the urge to pick up where he left off using Ancestry.com and other online resources,” he said. “My primary goal was simply to trace the male lineage of our Clark family in America back as far as I could.”

Clark was also able to clarify the story related to Thomas Jefferson.

“As expected, we were not direct descendants of Jefferson,” he said. “However, my great-grandfather six generations back was Capt. Alexander Clark and my-great grandfather, three generations back, served in the army of the Confederate States of America.”

At one point, Clark’s computer crashed and he lost all the data.

Segue to August 2016 and further exploration.

“To my surprise, I made connections with other researchers who shared a common ancestor in the 1627 birth of the first Clark in the ‘new world,’” Clark said. “I learned of our common ancestor lineage back to Rochdale, Lancanshire, England in 1070. This even preceded the existence of the surname ‘Clark’ which began three generations later. Clearly, this gives me a long, unbroken English heritage.”

The Normans used surnames to identify with a town or location or a trade skill they had by which they earned a living or a status, or title or position that they held.

The Normans, originally Vikings, settled around the French coastline. In 900-1100 AD they migrated to England and brought the practice of having a surname with them.

“The name ‘Clark’ derived from the Latin ‘clericus’ designating a member of a holy order or scholar or writer,” he said. “These were a higher educated class who became the scribes and recordkeepers of church records and official government records. Among my ancestors were people such as Sir Anketillus I Clerke de Woodchurch from Kent, England, and Baron Sir John Ford Clerke from Kent.

“Researching the meaning and origin of our surname has added a whole new dimension to learning about my family ancestry,” Clark concludes. “Now I want to see what I can find out about the first name in my history, the person born in Rochdale, Lancashire, England in 1070, Andreas Capellanus. Just the sound of it is intriguing.”

ADPH: 25 Alabama residents confirmed to have the Zika…