HOOVER – A Pelham teenager, Pedro Ivan Rico Mendoza, 19, is charged with reckless murder, two counts of first degree assault and leaving the scene of an accident after his silver 2013 Chevrolet Cruze collided with a 2016 Honda Accord on Interstate 65 on Aug. 14. 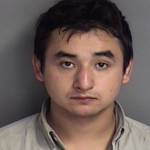 According to Hoover police reports, Mendoza was traveling the wrong way in the southbound lanes of I-65 when his vehicle collided with the Honda Accord. The Honda Accord was then hit by a black 2015 Chevrolet Cruze traveling southbound.

The driver of the black Chevrolet Cruze had minor injuries.

After the accident, which happened at 3:47 a.m., Mendoza fled the scene of the wreck on foot but was captured by Hoover Police on Alford Avenue.

According to police, alcohol was a factor in the wreck. On Aug. 15 Hoover police’s traffic homicide investigators arrested Mendoza and he was being held in Hoover City Jail on bonds totaling $100,000. He is awaiting transfer to Jefferson County Jail.