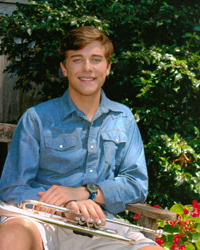 COLUMBIANA – A graduate from Shelby County High School will have a solo spot in the University of Alabama’s Million Dollar Marching Band at halftime of their first football game of the year in Arlington, Texas at the AdvoCare Classic.

Nathan Brom, who graduated from Shelby County last year and is a freshman at Alabama, will represent his former high school with a trumpet solo at the beginning of the halftime show.

“I was extremely nervous when they called my name to audition in front of 400 other people for the spot,” Brom said. “Then when they called out my number and said I would get the solo, I was shocked and ecstatic. Now I have to play in front of a little bit more than 400 people.”

Brom began playing the trumpet in the sixth grade under the direction of Tom Grigsby, who is still the high school’s band director.

He and his mom both said he knew extremely early on that playing the trumpet would be his career and what he wanted to work toward.

Brom’s mom Rebecca Brom said that he first became affiliated with Alabama through its summer crimson camp. She said that is where Nathan met Dr. Eric Yates, the trumpet professor at Alabama, whom he started taking lessons under at every available opportunity.

“There are really no words to put my excitement in perspective,” Rebecca Brom said. “I try to remain humble. Anything he does he works hard at, so of course I am proud because all of his hard work is paying off and that doesn’t always happen.”

She also said that coming from a small town like Columbiana it can be difficult to get recognized so everybody in the band worked a little harder to make sure they went above and beyond expectations.

“It was a rewarding journey, it’s just very rewarding to come from a smaller school like I did,” Nathan Brom said. “We pushed ourselves to work a lot harder because we might have been looked down on as not being as good as other schools in Shelby county.”

He said that playing the trumpet was just a natural fit and nobody had to force him to do it, he just really enjoyed sharing his music with others and knew this is what he wanted to make his career.

He is now enrolled at the University of Alabama as a music major and is off to a fast start preparing for that big moment Saturday, Sept. 3, when the Million Dollar Band takes the field.

“Performing in front of all of those people will be extremely nerve-racking, but doing what I love and sharing my music with others will easily get me through it, I am so excited.”

ADPH: 25 Alabama residents confirmed to have the Zika…