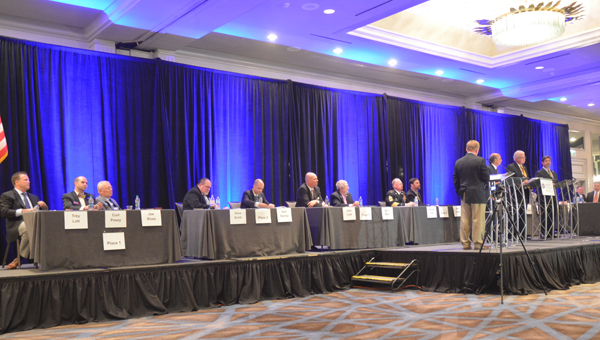 Candidates for Hoover mayor and city council answer questions during a forum on Aug. 16 at Hyatt Regency Birmingham – The Wynfrey Hotel.

HOOVER – Candidates for public office in Hoover tried to make a lasting impression on potential voters during a forum Aug. 16 at Hyatt Regency Birmingham–The Wynfrey Hotel.

Eighteen candidates for mayor and City Council participated in the forum, which was attended by about 350 people and sponsored by the Hoover City Schools Foundation, Hoover Sun and Hoover Rotary Club.

Frank Brocato, Gary Ivey and Steve McClinton are running for mayor, a position held by Ivey.

Brocato said he would be able to devote more time to city business than his opponents, both of which have other occupations.

“I’ll be a full-time mayor with a 150-percent commitment to you,” Brocato told those in attendance.

McClinton served as president of the Hoover City Schools Foundation for the past two years and stressed the need for more funding for education—a common theme throughout the forum.

“I’m the only candidate to believe in our schools enough to put my kids in them,” McClinton said.

Ivey said that while he agrees about the importance of education and the need for funding, it is not the city government’s only responsibility.

“It’s not just the schools that make the city,” Ivey said and mentioned parks, public safety and other areas. “It’s all important. It’s all got to work together.”

Mike Royer, a longtime Birmingham television news anchor now with the University of Alabama’s WVUA-TV, was moderator for the event.

Royer thanked the residents who attended the forum.

“Your presence speaks to your concerns and your caring for the city of Hoover,” he said.

For each group of candidates, Royer asked one question, then additional questions were posed by a panel that included representatives of each of the organizations sponsoring the event.

Other points made by the candidates are below.

•Would work to develop a master plan for the city, and identify a project manager for the plan.

•Would like to see Hoover create a “downtown” area with an arts center.

•Though a former Hoover Fire Department employee, Brocato did not receive the endorsement of the Hoover Firefighters Association, which favors Ivey. Brocato said the association is a union of which he was not a member while employed by the department, and that it does not represent department employees at large.

•Has served as mayor “more than full time,” as the position requires him to be on call in the event of emergencies and special situations.

•Has always been willing to talk about funding for the city’s school system.

•Relying on reputation as an effective mayor.

•Planning must include the “buy-in” of the community.

•Has experience managing budgets through his work as an investment planner that would translate to city finances.

•A change in mindset is needed for school system funding, including getting city and schools leaders together to discuss how to solve problems.

•Would take a conservative approach to the city’s finances.

•Resigned from the council in January because son was ruled ineligible to play football at Spain Park and moved to Alabaster. Though attendance at meetings has been questioned, did not miss important votes.

•A lifelong resident of Hoover, Posey is used to seeing heavy growth and wants it to grow again.

•Garbage pick-up could be coordinated with nearby municipalities to possibly save money.

•To find more money for schools, funds could be cut from unfeasible capital projects.

•Wants to maintain Hoover as “No. 1” in the state based on public safety, public works, schools, library and budget.

•Greatest challenge facing the city is long-term education funding and how it will affect financial stability in the city.

•Plans for $70 million sports complex in the city were approved after they were brought before the council with a sense of urgency. The facility was supposedly needed to keep the Southeastern Conference Baseball Tournament from leaving for another location.

•Pointed out that all 18 candidates on the state were men and said he would like to see more women involved in the political process.

•There are projects in the city’s budget that there is no intention of completing.

•A performing arts center would be a good idea, though he would want to know the details before committing to such a project.

•It is important for the city to support the opening and growth of small businesses.

•Though city government has approved construction of new homes in a city many already consider crowded, officials have actually worked with developers to reduce the scope of their planned projects in an effort to prevent overcrowding.

•Government should be transparent.

•Promised to serve only one term if elected.

•Various systems for determining City Council seats (places, districts, wards, etc.) have benefits and drawbacks. Staggered terms, where not all council seats are up for re-election at the same time, could be beneficial.

•Commitment to public service makes him the best candidate. Promised to donate his salary to a Hoover charity if elected.

•Technology should be used to share information about city planning with residents.

•As an engineer, has experience making decisions and problem solving.

•Hoover is at a crossroads with this election and wants to be part of the team that moves the city forward.

•Experience with problem solving and teamwork would make him an asset to the City Council.

•Residents must vote to approve the renewal of taxes to fund the city’s school system.

•Hoover is a destination city, and leaders must figure out how to keep it so.

•It takes a community effort to address zoning issues.

•Revenue is the city’s biggest issue. The city is growing, so expenses naturally increase.

•Apartment dwellers could feel isolated from the rest of the city.

•Public/private partnerships, such as ones that have been seen in developments in Birmingham and other areas, could play a role in Hoover’s growth in the future.

•Top priority would be planning, including bringing more people to the table.

•Residents should be surveyed about what budget items are most important to them.

•Is the best candidate because of experience with managing teams of people and budgets.

•It is important for residents to elect a good team of council members. An asset he could add to the team would be his experience as an educator.

•Would commit to the city maintaining a balanced budget without cutting services. Impact fees for new developments could be a source for additional funding.

•Does not consider his employment with the school system to be a conflict of interest, based on discussions with state and local supervisors.

•Does not think residents would be in favor of charges for garbage pick-up, and therefore does not support such a measure.

•Voted against the sports complex plan because the council or public was not given ample time to consider such a large project. However, additional phases of the project could not be delayed at this point.

•Would support the Hoover Area Chamber of Commerce as a resource for helping small businesses.

•Has long been involved with city policy and decided to run for office because he thinks he can be more effective on the inside than the outside.

•The city could do more to support small businesses, including holding workshops.

•Hoover needs a master plan after a previous plan instituted in 2003 was discarded.