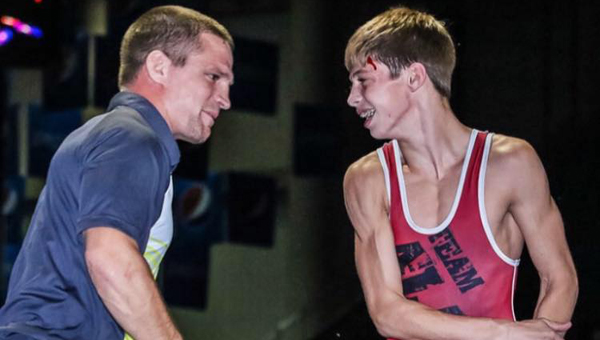 FARGO, N.D. – On a hot Tuesday in mid August at about 2:30 in the afternoon, the Thompson wrestling team is out in the parking lot, working. Head wrestling coach Shawn Weltzin and assistant coach Chris Pike are running their Warrior team, which has won five of the last six state titles at the highest classification of competition in the state, through some usual afternoon drills.

Weltzin and Pike gather the boys together, and instruct them to take a lap around the school, at which point the contingent of 30-plus wrestlers take off around the corner.

Welztin, knowing why a reporter has showed up to interrupt his practice, gazes in the direction of the side of the school his team will soon emerge from behind.

“Sam will be the first one back, in about three minutes,” he said, matter-of-factly and smiling faintly, and walked off to tend to some other business.

Sure enough, right at three minutes later, one runner comes around the corner of the far side of the school first, weaves past a school bus, and is back to where he started, breathing heavily and smiling.

This is Sam Latona. He’s quick to smile, stands about five-feet-six-inches, give or take an inch, and now weighs about 105 pounds. He has just started his sophomore year at Thompson High School and is one of the more promising young wrestlers in the state. A month ago, Latona did something that no other wrestler in the history of Alabama has done before. A month ago he won a USA Wrestling National Championship.

Before getting into the details about Latona’s historic success, some background is important. First, Latona has been wrestling since he was five. His older brother, Dominic, was a two-time Alabama individual state champion and is now wrestling at Virginia Tech, which finished last year as the No. 4 wrestling program in the country.

Regardless, the younger Latona is a wrestling nut. He started wrestling soon after his brother did and can’t really remember a time before wrestling was a part of his life. He loves the sport, and spends as much of his time as he can in the gym or on the mat.

“I barely even remember starting wrestling,” Sam said. “Dom started wrestling, then I started a few months later. I’ve always loved it. I just love going in the room every day and having a mindset that I’m going to get better. I love the feeling after practices, knowing that I just got better. I try to be in there every day, doing something every day.”

The Warriors won five-straight team state championships in Alabama from 2011-15 before being dethroned this past season by Vestavia Hills after an adversity-filled season. Over the last six years, Thompson wrestling has firmly established itself as the cream of the crop in Alabama thanks to wrestlers like the Latona brothers.

“He’s the kind of kid that you don’t have to ever worry about,” Weltzin said of Sam. “If he’s late to practice, even like five minutes late, you know there was a wreck or something major must have happened. You actually have to tell him not to go practice.

While state championships are important and will always to be a measuring stick for success, the Thompson program has, over the past few years, looked outside of the state in an attempt to establish itself as more of a regional and national power. The Warriors for example traveled to the Kaukauna Cheesehead Invitational in January of 2016 to compete against some of the top teams in the nation.

With that in mind, Thompson wrestlers like Latona have had more of a taste for national competition than most. That taste for competition on a larger stage helped to drive Latona, who has recently hit something of a growth spurt, to seek out more top-level tournaments this summer. As a result, on July 18, Latona was crowned the USA Wrestling Cadet Greco-Roman National Champion at the 2016 National Championships in Fargo, North Dakota in the 88-pound division.

There are a lot of words there that might not mean anything to non-wrestlers and are important to understand. A cadet just refers to all high school freshman and sophomores, which includes Latona, while Greco-Roman simply refers to the style of wrestling.

Greco-Roman, or Greco, wrestling differs from the folkstyle wrestling that dominates the high school and college ranks in the United States in one major way.

“It’s different than what we do in-season,” Latona explained. “It’s all upper body, you’re not allowed to touch the legs or go for the legs (in Greco).”

Greco primarily permeates international wrestling. At the Olympics, for example, Greco is one of the two styles of wrestling used, along with freestyle wrestling. Latona, as a side note, also made it to the finals of the 88-pound freestlye class in Fargo, which was another first for an Alabama wrestler.

At the high school level in the United States, folkstyle season runs essentially from August through March, and then freestlye and Greco wrestling season runs through the remainder of the spring and summer for year-round wrestlers. When Latona was finished with his freshman folkstyle season, he began to focus on Greco and freestlye for the first time in his life.

“I haven’t trained that much Greco,” Latona said. “This is the first summer I’ve really trained it, actually.”

Latona qualified for the National Championships in Fargo by placing second in the Southeast Regionals held in Atlanta two weeks beforehand. The National Tournament, which had 19 of the top 88-pound wrestlers in the country, was a chance for Latona not just to put himself, but the state of Alabama on the wrestling map.

Alabama is not known as a wrestling power. The sport is dominated by states like Pennsylvania, Wisconsin and Iowa, and the South in general is not known for producing top-level wrestlers. Only two Alabama wrestlers, Hunter Moon of Oak Mountain and JA Jones, also of Thompson, had made appearances in a cadet Greco final before Latona.

Latona’s lack of experience in Greco wrestling did nothing to stifle his confidence going into the National Championships, and he said he always felt capable of doing something special on a national stage.

Through the first three rounds of the tournament, Latona did not surrender a single point. He beat Dylan McChesney of Colorado, Preston Butler of Utah and Jackson Cockrell of Oklahoma all by technical fall, which is the wrestling equivalent of a mercy rule. In the semifinals, Latona beat Paxton Crease of Minnesota, which set up a finals appearance with Andrew Chambal of Michigan.

“He got second in the Cadet World Team trials,” Latona said of Chambal. “He was pretty tough.”

Latona can rehash the championship match to a certain point, but confesses it happened pretty fast. He gave up the first point on a passivity call, he remembers that, before eventually getting the 6-1 win and claiming the title, which cemented his place in Alabama wrestling history.

Now, with a few weeks’ separation from his historic win, Latona has had some time to process his achievement. He is the first Alabama wrestler, cadet or junior, to win a wrestling national championship, and that feeling of excitement he had after winning has continued to stay with him.

“It didn’t really settle in until the ride home, a few days later,” Latona said. “It’s just amazing. I mean really all I can say is I’m still excited.”

As Sam Latona continues to grow and develop, he will undoubtedly have and win many memorable wrestling matches. However, this one will likely always hold a special place in his memory.

It certainly will across the state.