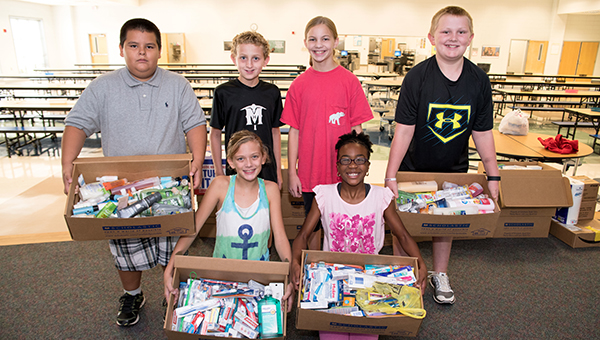 Back row from left, Max Yanez, Caleb Haney, Jill Wilson, Reece Mims and front row from left, Lauren Sawyer and Caitlyn Copeland hold up supplies that have been collected the week of Aug. 15 at Helena Intermediate School that will be shipped to Louisiana to help flood victims. (Reporter Photo/Keith McCoy)

HELENA–The state of Louisiana has been hit with hard flooding over the last several days that left thousands homeless and resulted in a number of fatalities after floodwater rose to historic heights, and Helena Intermediate School decided to take action.

Students in Ken Ard’s and Brenna Ferrell’s fifth grade classes at Helena Intermediate School began collecting a variety of hygiene products the week of Aug. 15 and in just four days, the students collected dozens of boxes filled to the top with products that will be shipped to Louisiana on Aug. 19.

Dozens of large boxes containing shampoo, conditioner, toothpaste, tooth brushes, dental floss, soap, wash cloths and more could be seen in the HIS cafeteria and the hallways on Aug. 18, and Ard was surprised at the large volume of donations.

“This all started after my friend Nick Whitehead called me and asked me personally if I had any supplies to donate,” said Ard. “Nick has family in Denham Springs and I decided that we could collect hygiene products to do as a school service project.”

One phone call resulted in an overwhelming response as students in Ard’s class were still helping sort the hygiene products and placing them in the correct boxes the morning of Aug. 18, as supplies continued to come in.

The theme for Helena Intermediate School this year is Helena In Service (H.I.S.) and many of the boxes had encouraging messages that read, “You are in our thoughts and prayers!”

HIS fourth grader Max Yanez contacted his church at Homewood Church of Christ and a large portion of supplies were donated as Yanez said his favorite thing is being able to help people.

“I felt like we needed to do this and as Christians just show the faith of God,” said Yanez.

Ard said he and Whitehead would collect as many boxes as possible to fit on a truck to be shipped down to Louisiana on Aug. 19, but whatever was left over the Helena Cumberland Presbyterian Church agreed they would take and ship the remaining items.

The Alabaster Water Board has completed more than $3 million in upgrades to the city’s water system over the past... read more