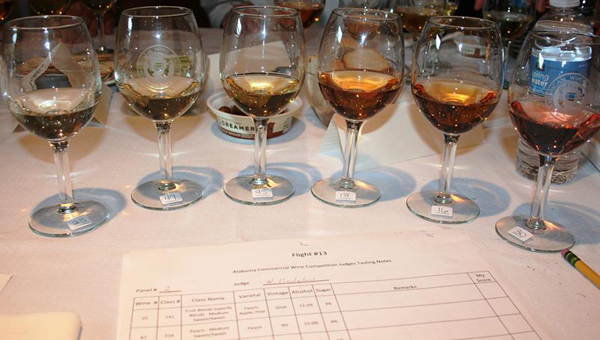 Four local wineries from Shelby and Chilton County were recognized at the second annual Alabama Commercial Wine Competition on Aug. 6 in Huntsville.

The competition ran by Alabama Wine Inc. honors state wineries and breweries with medals based on smell, taste, finish and overall appearance of the wine. Alabama Wine Inc. founder and director Steve Young said the competition is judged blindly in two parts and the wines are separated into different categories based on grape varieties and additional ingredients used.

“We’re not judging the wines based on how we like the taste,” Young said. “We’re looking to see if the wine is exactly what’s its supposed to be.”

Young said a gold medal win means the wine scored a 17 or above based on a 20-point scale.

Young said winners of the top awards, “Winery of the Year” and “Wine of the Year,” are based on an average of points received from medal and “Best of Class” wins. Winners of the top honors will be announced at a ceremony during the Big Spring Crush Wine Festival in Huntsville in September.

Ozan won both of the top awards at last year’s competition and tied with Jules J. Berta Vineyards, of Albertville, for the most gold medals this year.

“We are the reigning winery this year,” Ozan tasting room manager Paige Blake said. “We’re not sure if we’ll uphold our title but we’re hopeful.”

Blake said the winery submitted five wines and were excited to receive a medal on each one.

“We were absolutely thrilled,” she said. “We love that there is a competition in Alabama now, and are happy to currently be on top.”

“We just celebrated our fifth anniversary in June and decided to enter our first competition,” Bailey said. “We entered four wines, and three received a gold medal and one a silver medal, we’re pretty proud of that.”

Bailey said they were very excited at the outcome and look forward to the award ceremony at the end of September.

Lewis Lakes Vineyards owner Bill Lewis said he is happy at the reception the vineyard’s wines have had. Lewis said they earned a gold medal and three silver medals last year and were excited to receive a medal on the wine they submitted this year.

“We had a lot of positive in-state and out-of-state feedback and wanted to see if people who didn’t know us or our story would like the wine,” Lewis said. “I guess they did and we’re very pleased with their response.”

Tom Vizzini owner of Vizzini Farms Winery said he was glad for a competition in Alabama and was happy with the results for their first year competing in it.

“Alabama needs to grow the wine business,” Vizzini said. “I think this is a step in the right direction with the competition growing like it has.”

He said they only entered one variety this year and plan to submit more varieties for next year’s competition.

The wineries won the following medals:

Ozan and Hidden Meadows will find out if they won big at the awards ceremony on Sept. 24. Blake and Bailey both said they look forward to the festival and hope the wineries will do well.

For more information on the ACWC visit their website at alabamawine.org.