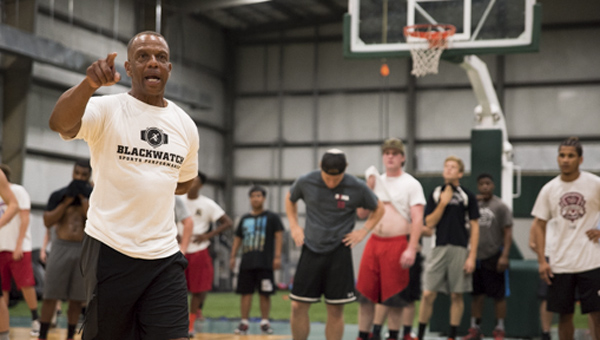 Later that morning, they walked out with a more firm grasp of speed, agility and other factors affecting their game and overall physical fitness from none other than two-time Olympian Willie J. Smith III, who won gold medals in the 1976 and 1984 Olympic games.

“I think it’s a good switch-up for us,” SHS head football coach and athletic director Matt Griffith said. “To have the opportunity to work with a world-class Olympic medalist sprinter, that’s good for the kids.”

Like the other athletic trainers at BlackWatch – which opened in the former Sports Blast facility off U.S. 280 in June – Smith infuses his programs with personal expertise; namely, his knowledge of speed from a scientific standpoint.

And a constant offering of programs led by Smith and other sports celebrities for adults, teens and even young children is what people can expect to find at BlackWatch, founder and CEO Randy Beckham said.

“The trainers we have are top-notch,” he said, noting the BlackWatch staff is comprised of former collegiate and professional athletes. “We hired them not because they are great players, but because they are (great people). Our staff is the backbone of our company.” 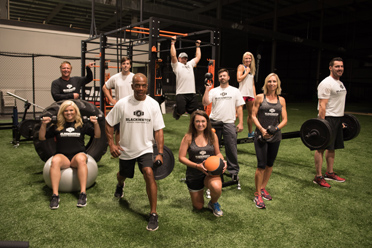 The staff at BlackWatch Sports Performance consists of former collegiate and professional athletes equipped to train people of all ages. (Reporter Photo/Keith McCoy)

Before Beckham and his family moved to Birmingham nearly eight years ago, he operated a similar facility, Velocity Sports Performance, in Orlando, Fla.

His original plan was to stay in the Birmingham area for just a few years, but when the time came to go back to Florida, his family didn’t want to leave.

As he researched potential locations to open his business, he found the 41,000-square-foot building off U.S. 280 formerly occupied by Sports Blast, and decided it was a great fit for his vision.

“The timing was really good,” he said. “We were bringing something to the area that I thought was in need. Shelby County has been very supportive of BlackWatch. They’ve been outstanding.” 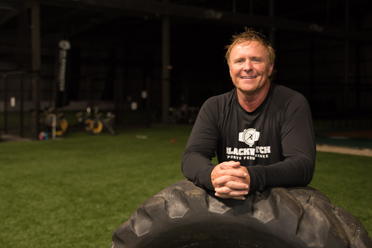 “We want to instill fun back into athletics,” Beckham said. “Our motto is ‘Using athletics to build better people.'”

BlackWatch takes a holistic approach to combining health and wellness with sports performance, offering a comprehensive range of services beneficial to all ages, collegiate and non-collegiate, professional and non-professional athletes alike.

“We’re really trying to build a community effort here (and) brand ourselves as all-sport training,” Beckham said. “We’re ready to rock and roll for the school year. We’re going to be great for the community.”

Smith likened BlackWatch to a “sports mall,” where a child can train for baseball season at the same time his parents are taking a fitness class.

“It’s like a one-stop shop,” said Smith, director of athletic performance at the facility. “We want people to come here because you can get all you want in one place, for all sports.”

The renovated, multi-use facility contains turf fields on both sides for a range of sports, including football, soccer, lacrosse and field hockey, along with batting cages.

The turf is composed of a rubber infill system, a cutting-edge feature seen in pro stadiums that is easier on athlete’s joints.

Beckham can check BlackWatch’s opening off his to-do list, but he has other, ongoing goals for the facility, such as bringing “sports celebrities” to the facility on a regular basis, and continuing to improve the interior amenities and services.

“We feel like we’ve created an environment where the whole family can get all they need,” he said. “Everybody can do everything right here. I think that is something unmatched.”

Beckham called the opportunity to open BlackWatch a “blessing,” and made it clear he and his staff are not settling for mediocrity in serving the community.

“BlackWatch Sports, in everything we do, will be elite,” he said. “Everything we do is set out to be the best of the best. That mentality is what we teach.”

BlackWatch Sports Performance is located at 19220 U.S. 280 in Birmingham.