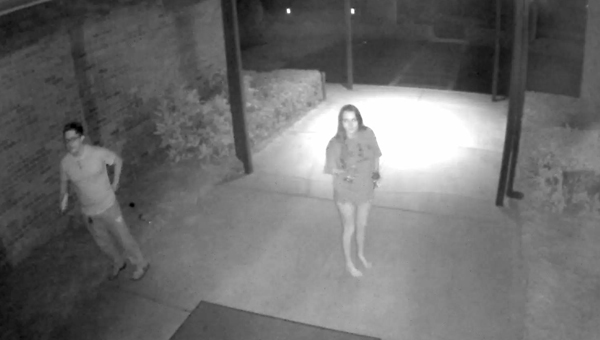 An image from surveillance video at Briarwood High School was posted to the Shelby County Sheriff’s Office Facebook page to help identify two subjects who vandalized the school.

NORTH SHELBY – Two suspects believed to have vandalized Briarwood High School’s campus with spray-painted “hateful and vulgar” words and images have been identified.

The suspects have not been charged or arrested, according to Debbie Sumrall, community outreach with the Shelby County Sheriff’s Office.

Sumrall said the names and ages of the suspects are being withheld, pending formal charges.

Windows at the school campus were vandalized overnight Aug. 14. The suspects did not enter the school.

Images from the school’s surveillance system were posted to the SCSO Facebook page on Aug. 18, along with a message seeking the public’s help in identifying the subjects.

“Within 44 minutes, we had someone identify the female,” Sumrall said and added that investigators were then able to determine the identity of the other subject, a male.

The words and images spray painted at the school were “hateful and vulgar,” according to the Facebook post.

“It was on the glass, so we just washed it off,” Mosbacker said. “It really wasn’t an issue.”